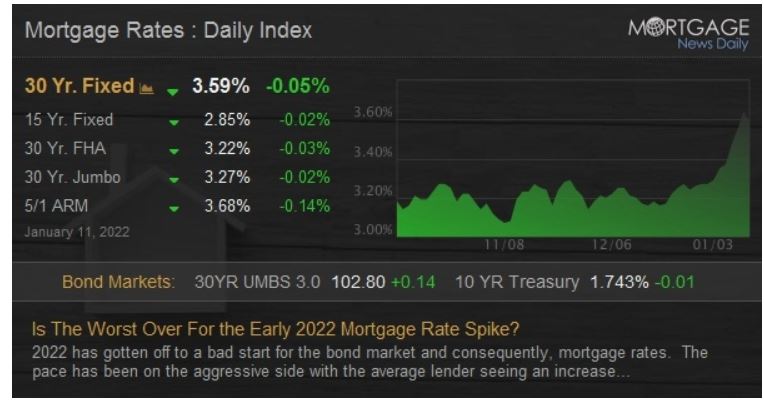 Mortgage rates have been rising steadily:

2022 has gotten off to a bad start for the bond market and consequently, mortgage rates.  The pace has been on the aggressive side with the average lender seeing an increase of more than a quarter of a point in a week and 3/8ths of a point in 2 weeks.  The most prevalent 30yr fixed quotes are now in the 3.625% range, up from 3.25% at the end of December.

How many guessers had rates in the mid-3s in the first half of January?

Lawrence Yun, chief economist for the National Association of Realtors, projects that mortgage rates will increase to 3.7 percent in 2022, pushed up by persistently higher inflation.

Danielle Hale, chief economist for Realtor.com, expects the 30-year fixed mortgage rate to average 3.3 percent for most of the year and be at 3.6 percent by the end of the year.

Daryl Fairweather, economist for Redfin, expects rates to rise slowly from around 3% to around 3.6% by the end of 2022, thanks to the pandemic subsiding and lingering inflation. That would mean about $100 more per month in mortgage payments for the median home.

MBA economists predict that the 30-year fixed-rate mortgage will rise to 4 percent by the end of 2022.

Bankrate.com predicts that the 30-year fixed mortgage rate will peak at 3.75 percent during the year and fall back to 3.5 percent by the end of the year. “Long-term rates will move higher in the first half of the year, but by the close of 2022, concerns about slowing economic growth will be unwinding that and bringing them back down,” he said. “This will be higher than where mortgage rates started the year but ending at levels previously unseen before the pandemic began in 2020.

Lending Tree predicts that the 30-year fixed mortgage rate will rise to near 4 percent by the end of the year.

If their predictions are right, then rates should flatline for the rest of the year and be a non-issue.