Great thoughts from Ryan at www.sacramentoappraisalblog.com: 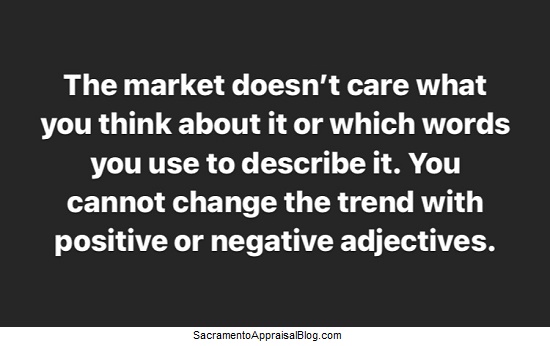 I’ve had a number of emails lately critiquing my use of the word “slowing,” so I wanted to talk about this openly. I hope that’s cool. If this isn’t your thing, just scroll down. By the way, I’m always good with constructive critique too.

Bro, don’t say slowing: Over the past few months the market has slowed. Or wait, it cooled. No, the temperature changed. I mean, it’s normalizing. Uh, it’s actually stabilizing. Thankfully there isn’t just one way to describe things. I’ve been talking about a seasonal slowing for months because that’s the story the stats are telling. But the word “slowing” almost seems offensive to some, so let’s talk about that.

The market isn’t fragile: The housing market is big and I feel like it’s splitting hairs to argue about whether we should use the word slowing, normalizing, or cooling. Here’s the thing. Use whatever word you feel best represents the market, but it’s probably going to take a few key phrases to do the trick. No matter what, recognize the market is NOT fragile (“fra-gee-lay“) and it doesn’t need you or me to protect it with glowing words. Look, I can think positive thoughts all day long about cryptocurrency, but that doesn’t change the value of bitcoin. In terms of housing, the market is dynamic, multi-layered, complex, and there is no such thing as jinxing the trend by using less-than-glowing words.

Moving fast & slowing: If you aren’t down with the word slowing, that’s fine, but in my mind it’s a reasonable way to describe the market. But to say slowing alone isn’t perfect either as I keep saying because the market is doing two things. It’s moving really fast. And it’s slowing for the season.

Okay, I won’t talk about this again for a while.

My commitment: I will never spin data or sugarcoat things to sound better or worse than they are. My goal is to be neutral while presenting analysis based on the numbers. I’ll come up with helpful word pictures to describe the market too (and sometimes crazy comparisons).

Plans are taking shape for 10,000 units of new housing in the heavily industrial area - Is San Diego building an Amazon company town from scratch? https://www.sandiegouniontribune.com/news/environment/story/2021-09-25/san-diego-amazon-company-town