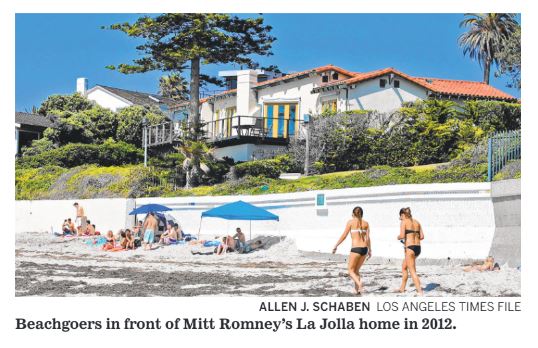 A small part of American history, the home became an example of what opponents in the 2012 presidential election said was an example of Romney being out of touch as he attempted to build an elevator on the property for his cars.  The “car elevator” house was often tied to Romney’s opposition to the bailout of the auto industry during the Great Recession. “The cars get the elevator, the workers get the shaft,” said former Michigan Gov. Jennifer Granholm in one of the most often-quoted speeches from that time.

The grant deed said the Romney home was sold to William Rastetter, and his wife, Marisa. Rastetter has been a force in San Diego’s biotechnology and venture capital scene for more than three decades. He’s perhaps best known for his 20 years at IDEC Pharmaceuticals, where he served in leadership roles including chief executive, president and director. While there, he was the co-inventor of Rituxan, the first monoclonal antibody cancer treatment approved by the U.S. Food and Drug Administration. IDEC merged with life sciences giant Biogen in 2003 for $6.8 billion.

Rastetter also served as board chairman of gene sequencing giant Illumina for 11 years, and has been a director at myriad other local life sciences firms. They include Neurocrine Biosciences, Regulus Therapeutics, Fate Therapeutics and Receptos, which was acquired by Celgene Corp. in 2015 for $7.2 billion.

Romney and his wife, Ann, purchased the property at 311 Dunemere Drive in 2008 for $12 million. The existing 3,009-square-foot home was torn down to build an 8,153-square-foot mansion with five bedrooms, six bathrooms and 65 feet of ocean frontage. It is one of roughly 30 beachfront homes in La Jolla.

The home was sold off-market, making a photo of the notorious “car elevator” hard to find. A 2020 assessment of the property, valued at $15.3 million, said the four-car garage was completed.

Room for parking in San Diego beach communities is rare. The most expensive La Jolla home sale, $24.7 million at 8466 El Paseo Grande in January, has a two-car garage. Romney’s campaign in 2012 said the lift was necessary to create a four-car garage because he has many children and grandchildren.

Romney revealed he had sold the home in late June in a virtual discussion about infrastructure sponsored by the Salt Lake Chamber, and was first revealed by The Salt Lake Tribune . At the time, his staff declined to discuss the details, including the price.

The San Diego Union-Tribune reported in 2015 that Romney had been considering selling the home near the end of its rebuild. The project was opposed by several neighbors and conservationists for what they said was an out-of-place design in La Jolla.

Romney was not the only well-known person to live at the property. The original home was owned by former San Diego Mayor Maureen O’Connor and her late husband, Bob Peterson, founder of Jack in the Box restaurants.

Mitt Romney recently paid $12 million to buy a home on the ocean in La Jolla, Calif., near San Diego. His son Matt lives in the same area.  The former Massachusetts governor, whose main residence is in Belmont, Mass., says he has no plans to become a California resident, and the purchase has nothing to do with a possible future presidential run.