There will be a whole new wave of lawsuits against listing agents who insist on rushing buyers through the process.  They think it’s a good thing to shorten the contingency periods and then make themselves scarce – and they are going to get what they have coming to them.

From the wsj and realtor.com:

Stella Guan spent months searching for a home to buy, getting outbid again and again in the white-hot real-estate market of the Los Angeles suburbs. Finally, her offer on a “beautiful” Santa Clarita house was accepted in August, she said. The graphic designer, 30, paid roughly $600,000 for the house. But after sleeping there for only a few nights, she had an unfortunate realization. “I was like ‘uh-oh, I hate this house,’ ” she recalled. “I hate this house so much.”

Looking back on it, she said, “I should have seen all of the warning signs, but the pandemic housing fever got the better of me.”

A house, unlike expensive jewelry or clothing, can’t be returned if the buyer is unhappy with it, so a cardinal rule of home buying is that you shouldn’t rush into a purchase. But in 2020, millions of Americans did just that.

Fleeing small apartments, buying vacation homes or simply looking for a change of scenery amid the crushing boredom of lockdowns, people scrambled to buy houses amid the pandemic, spurring bidding wars and supercharging real-estate markets across the country. Now, many are discovering the pitfalls of these hasty purchases, ranging from buyers’ remorse and financial strain to damage caused by unexpected problems.

This spring especially, “people were so panicked,” said Priscilla Holloway, a Douglas Elliman agent in the Hamptons, a popular spot for New Yorkers seeking refuge from the pandemic. “Buying a home is a huge commitment. You have to be thorough. But people were getting all crazy, and they weren’t as thorough as they usually are.”

Ms. Holloway said she helped a family move this summer after discovering that the Hamptons house they had just bought had an infestation of wasps nests in the backyard. The family didn’t find the wasps until after closing because they had waived the inspection in the midst of a bidding war, said Ms. Holloway, who wasn’t representing them at the time. Deciding the property was unsafe for their young children, they immediately put the Westhampton Beach home on the market. Ms. Holloway and a colleague helped them find another house to buy. 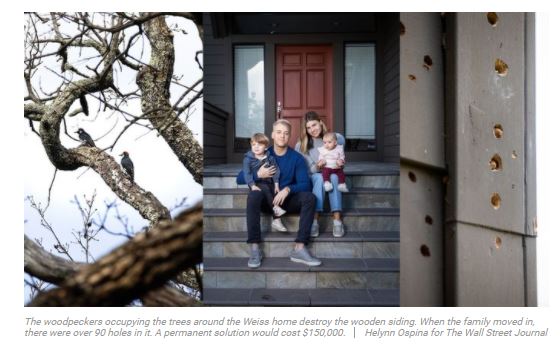 Nature had an unpleasant surprise in store for Richard and Meaghan Weiss when they bought their first home in Northern California after moving from Brooklyn.

When Covid hit, the couple left their Brooklyn apartment to stay with Ms. Weiss’s parents in Sonoma, Calif. Ms. Weiss was pregnant and they had a toddler at the time. “Being cooped up in an apartment, not being able to see people in New York, sounded like a miserable existence,” said Mr. Weiss, 40, who works in commercial real estate.

After a few months they decided to relocate permanently to the Bay Area, where Ms. Weiss grew up, and started looking for a home to buy. They found the market to be “super-duper competitive,” Mr. Weiss said. They were outbid on one house and backed out of a contract on another when they found out it had serious foundation issues.

Finally, they were able to buy a four-bedroom house they loved in the East Bay, paying about $100,000 over the $1.89 million asking price to beat out another bidder. “We were a little bit overeager because we’d been burned twice,” he said. “We probably didn’t do the due diligence we should have and looked at everything as thoroughly as we probably should have.”

They closed on the hillside house in November. When they returned a few weeks later to move in, “we see all these holes in the siding,” Mr. Weiss said. On closer inspection, they found that the wood on one side of the house was “absolutely devastated,” with some 90 holes in it. It turned out that the culprits were acorn woodpeckers living in the large oak trees surrounding the house. “Come to find out, it’s a systemic problem in the neighborhood,” Mr. Weiss said.

The seller hadn’t said anything about the birds, he said, and coming from Brooklyn, he and his wife didn’t know to ask. Since then, they have tried various deterrent devices and consulted with exterminators, but the only permanent solution is to replace the home’s wooden siding with cement at a cost of roughly $150,000.

If it weren’t for the frothy pandemic market, Mr. Weiss believes they would have discovered the problem before closing. “I think we would have been slower and more thoughtful and more methodical,” he said. “Buying a home becomes emotional. Because we were emotional from losing the first two and the competitiveness, we just kind of dropped our level of diligence and plowed through.”

Ms. Guan started bidding on houses in the L.A. suburbs even before she moved there from the New York City area in July. She had a good experience with her first home purchase, a New Jersey condo, and with interest rates low, she was eager to jump into the California market. “I thought it’s going to be the same as New Jersey. I’ll enjoy the ownership and make money in a few years.”

But she arrived in L.A. to find “the most insane housing market I’ve ever seen,” she said. Every house seemed to get 15 or 16 offers, she said, and sell for $100,000 over its asking price. Her offer was eventually accepted on a circa-1975 house with a renovated kitchen in Santa Clarita. At that point, she had been outbid on seven other houses, she said, so she was determined to get this one, even when the inspection revealed toxic black mold and asbestos. “I was really trying to get out of where I lived,” she said. “I spent five to six months looking. All of these factors made me say, ‘OK, I have to just face it, I can’t back out.’ ”

She sold the house a few months after buying it. After the repairs, agents’ fees and transaction costs, she said, “I lost a lot of money.” She now lives in a rented studio in L.A.’s Koreatown, where she said she’s much happier. “It still hurts,” she said, but “it’s just good to have my money back and move on to other things. And never see the house again.”