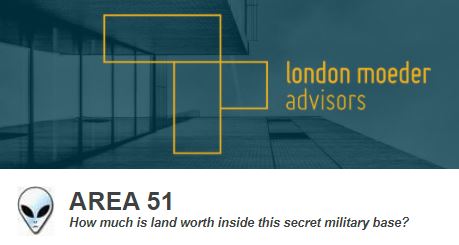 Yes, that AREA 51 . . . London Moeder Advisors were retained as experts to conduct market research and financial analysis in a now completed multi-year case involving property within the Nevada Test and Training Range (“NTTR”), known as AREA 51. The case involved the condemnation of 400 acres of land, the “Groom Mine”, which sits within the base and has a view of Area 51 from seven miles away.Firm principal Nathan Moeder was the key expert witness for the United States Department of Justice (US DOJ) serving as its real estate economist and market expert.

The Landowners’ position was that, but for the condemnation, the property could have been sold to a developer for $49.9 million. They argued that the property could be transformed into an attraction featuring “alien tourism”, principally offering visitors views of the distant base facilities.

To determine just compensation for the taking, the Court assembled a Land Commission that consisted of two retired judges and one retired State Supreme Court justice.

Moeder testified that the business plan for alien tourism is highly speculative, indefensible and lacked empirical support . He also explained that there are other issues that affect value that are not reflected in appraisals. He detailed how developers and investors factor risk, such as the inability to monetize the limited market for alien tourism, or the need to achieve approvals and entitlements.

“If the demand is not there permanently or [is not] sustainable and it falls off, the value of that investment plummets. So a developer and investor wants to know that it is sustainable,

“The biggest risk is after people go there and see it, what if there’s a bad Yelp review and people say there’s not much to see there? Is it still guaranteed that 90,000 people are going to come year after year indefinitely, for perpetuity, that creates the justification for the $50 million?”

None of the evidence put forth by the Landowners’ experts would give a buyer the confidence to pay nearly $50 million for the land, he argued.

As a result, the Commission and the Court determined the highest and best use to be “rural recreation” as of the date of value. Just compensation for the taking was ruled to be $1.1 million (plus $104,000 for the mineral rights).

To read more details on this case, click this link: Litigation Profile 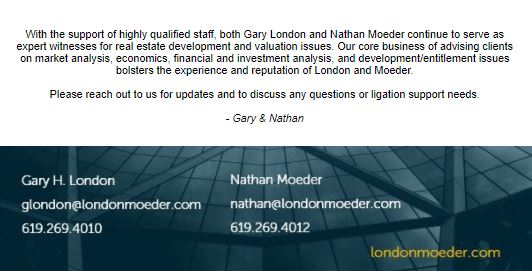