Splitting up the price index by tiers does give us a better read on which segments are hotter……and interesting to see that the higher-end has been cooking lately:

Black Knight, in the current edition of its Mortgage Monitor covering December mortgage performance data, writes an epitaph for slowing home price appreciation. Prices had been appreciating at an annual rate of nearly 7 percent in early 2018 but had fallen to 3.8 percent in August of 2019 as affordability worsened.

But then, as Black Knight’s President of Data & Analytics, President Ben Graboske writes, “The national home-price-growth rate gained a good deal of steam as mortgage interest rates declined throughout the second half of last year. In fact, December marked four consecutive months of home price growth acceleration and the largest single-month acceleration in more than 6.5 years, while the annual rate of appreciation saw nearly a full percentage point increase over the last four months of 2019, closing out the year at 4.7 percent.”

Much of the month’s Monitor is concerned not only with how these lower interest rates throughout the back half of last year contributed to sharply accelerating home price growth, but also to improving affordability.

At the low end of the market, those homes in the bottom 20 percent by price, continue to grow at nearly three times the rate of those in the top 20 percent price tier; 6.6 percent versus 2.3 percent in the last four months of 2019. However, that highest priced tier has been more reactive to the recent declines in interest rates; the rate of appreciation among those homes nearly tripled from August to December while the bottom tier barely budged. 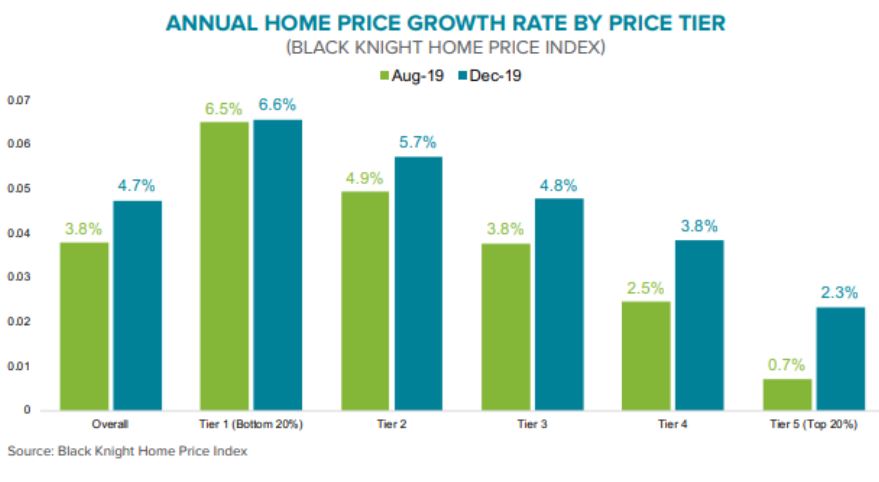 “Still, even with home price growth accelerating today’s low-interest-rate environment has made home affordability the best it’s been since early 2018, Graboske points out. “At that time, the housing market was red-hot, with national home price growth at 6.6 percent and climbing – before rising rates and tightening affordability triggered a pullback in growth rates. That’s not the case today. Despite the average home price increasing by nearly $13,000 from just over a year ago, the monthly mortgage payment required to buy that same home has actually dropped by 10 percent over that same span due to falling interest rates.”