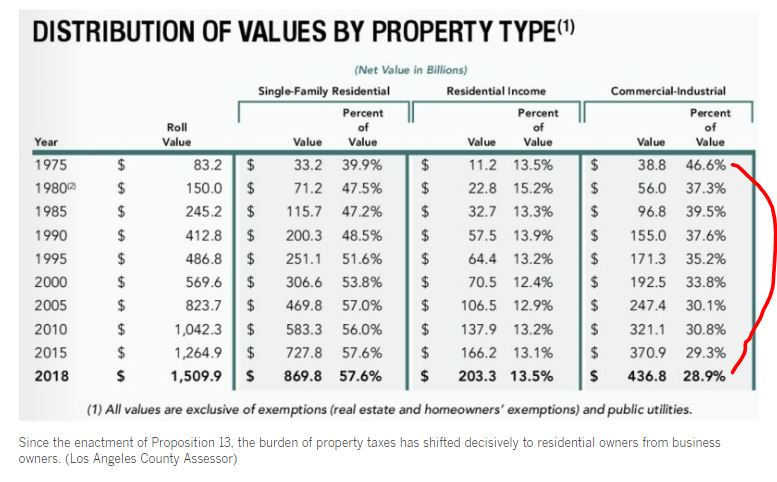 Could a reassessment of Proposition 13 finally be in the wings?

Advocates of the long-needed change have their fingers crossed, now that a measure to revise Proposition 13 has qualified for the November 2020 ballot.

The initiative wouldn’t involve a wholesale review of the 1978 tax-cutting proposition; that’s still considered a politically impossible lift in a state where property tax breaks have become embedded in millions of homes and apartment buildings.

Instead, the measure takes aim at what long has been considered the Achilles’ heel of Proposition 13, namely its treatment of commercial and industrial properties. The idea is to create what’s known as a split roll, in which residences retain their imperviousness to reassessment but business properties don’t.

“My instincts tell me that the split roll is moving into more positive ground,” Los Angeles Assessor Jeffrey Prang told me, “and if next year there is a big Democratic turnout, that is likely to benefit the initiative.”

The proposal would require that commercial and industrial properties be assessed at full market value and reassessed at least once every three years. That’s a big change from the current law, which allows them to be reassessed only upon a change of ownership.

“That’s a ridiculous, outdated, irrational system which causes damage in many different ways,” says Lenny Goldberg, a veteran critic of Proposition 13 who helped craft the new initiative. “We have this huge hole in the heart of our tax system.”

He’s right. Thanks to Proposition 13, massively profitable commercial properties that haven’t changed hands in decades — Disneyland, say — are billed property taxes at 1970s-vintage assessed valuations while homes and businesses around them have much higher bases.

But here’s the punchline: As much as counties would appreciate the additional tax revenues, their assessors almost uniformly hate the initiative. That’s because it would saddle them with a workload that many say would be simply impossible to manage without years of preparation — far more than the three-year transition period implied by the initiative.

“I cannot implement the measure within three years,” Prang says. “It’s physically not possible.” The California Assessors Assn. agrees. It estimates the cost of the transition running as much as $470 million a year for up to 10 years — and individual assessors say that may understate the costs and challenges of making the change. These may be so great, they warn, that for many years they could exceed the additional tax revenues the change brings in.