As blogger-in-chief here, I’ll stay on the lookout for the positive housing news – because you won’t have any trouble finding the alternative, like this guy who has been calling for home prices to drop 10% to 30% for several years now:

Here’s a Bloomberg essay that draws some comparisons to the 1994 market, which is another time we had a spike in mortgage rates.  We had neg-am and no-doc mortgages then, and were coming off a multi-year downdraft of housing prices due to the S&L crisis, but if mortgage rates are the big decider, then it’s a fairly good comparison – note the 20% drop in new-home sales:

Housing market softness in the back half of 2018 has investors and the public wondering how bad things might get. It’s understandable that people would be worried, considering that the last housing downturn led to the worst economic crisis since the Great Depression.

But housing market fundamentals in this cycle are nowhere near as risky as they were in the mid-2000s. Real-time data on mortgage applications suggest a milder path. Coincidentally, it looks a lot like 1994.

The economy in 1994 is remembered largely for financial market turmoil brought about by sharp increases in the federal funds rate by the Federal Reserve. During that year, the Fed increased its target rate for lending between financial institutions to 5.5 percent from 3 percent, a 2.5 percent increase in one calendar year.

The other noteworthy story of the 1994 economy was what happened to the yield curve. Because of the sharp increase in short-term interest rates, the yield curve flattened significantly. The spread between two-year and 10-year Treasury rates at the end of 1993 was 1.58 percent. By the end of 1994 the spread was at 0.15 percent — close to zero, but not quite inverted.

The story in 2018 is similar. While the increase in mortgage rates this year is not as severe as it was in 1994, the housing market is dealing with other headwinds — rising costs from land, labor and materials prices, plus a shortage of inventory after years of building fewer homes than population growth would seem to warrant. An increase of one percentage point in mortgage rates between mid-November 2017 and mid-November 2018 made homes less affordable.

Similarly this year, we’ve witnessed a flattening, but no inversion, of the yield curve. The spread between two-year and 10-year Treasury rates ended 2017 at 0.52 percentage points, and as 2018 winds down the spread has been falling to close to 0.1 percentage points.

It’s understandable why many fear this is a prelude to another big crash. Home sales have fallen, and inventories are rising. Home price appreciation has slowed, particularly for higher-end homes. The yield curve has flattened, with investors starting to anticipate interest-rate cuts in 2020 and beyond.

Prospective buyers see negative stories about the housing market, get nervous, and decide to sit back and see how things go rather than putting in offers. It’s the same thing that happened before the onset of the housing bust and the great recession.

Except we’ve built nowhere near as many homes over the past decade as we did in the years leading up to the 2008 financial crisis. Underwriting standards remain strict, as anyone who has needed financing to buy a home in recent years can attest. Household mortgage debt relative to incomes or gross domestic product continues to fall. Job growth continues, and wage growth is accelerating at a slow pace. 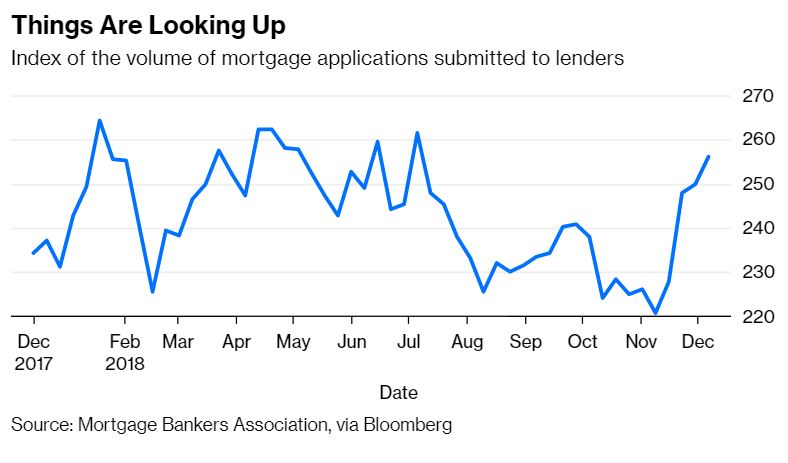 And while it’s still too early to draw any conclusions, mortgage application data in recent weeks is starting to tell a different story.

Mortgage purchase applications have responded to that modest drop in mortgage rates. The seasonally adjusted purchase index from the Mortgage Bankers Association has risen for four weeks in a row, to its highest level since July. The index is now up over the past year. We should be careful about reading too much into a few weeks of data, but perhaps, as happened in 1995 after the mild housing slump of 1994, a stabilization or decline in mortgage rates will support affordability, comforting the prospective buyers still a little nervous about a repeat of the troubles from a decade ago.

While housing is a smaller share of economic activity at the moment than it historically has been, a positive shift in sentiment there could be the early surprise of the economy in 2019.