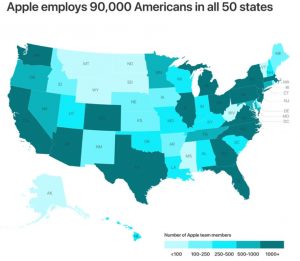 Now if they could just get along with Qualcomm:

Apple today announced a major expansion of its operations in Austin, including an investment of $1 billion to build a new campus in North Austin. The company also announced plans to establish new sites in Seattle, San Diego and Culver City and expand in cities across the United States including Pittsburgh, New York and Boulder, Colorado over the next three years, with the potential for additional expansion elsewhere in the US over time.

Apple plans to grow its employee base in regions across the United States over the next three years, expanding to over 1,000 employees in Seattle, San Diego and Culver City each, and adding hundreds of new jobs in Pittsburgh, New York, Boulder, Boston and Portland, Oregon. The company recently opened its newest office in Nashville, Tennessee and Apple’s Miami office is projected to double in size.