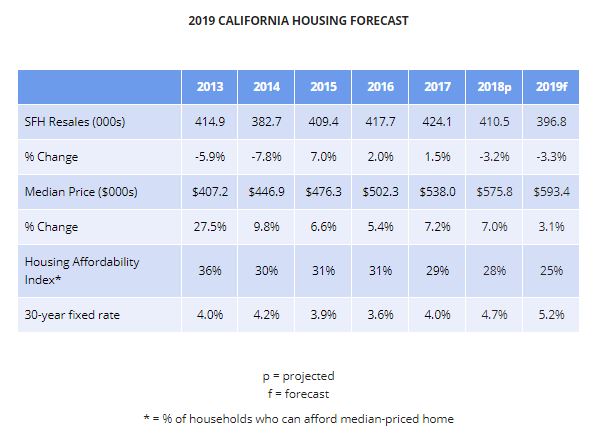 The California Association of Realtors has released their 2019 forecast (above).

Their projections haven’t been that close, which means their guess of 3.3% fewer sales should end up being -5% to -8%.  The pricing statistics should keep rising though, due to buyers holding out for superior homes – with fewer inferior homes selling, the median can rise even though prices are stagnant or falling.

A comparison of the C.A.R. forecasts (released every October):

A combination of high home prices and eroding affordability is expected to cut into housing demand and contribute to a weaker housing market in 2019, and 2018 home sales will register lower for the first time in four years, according to a housing and economic forecast released today by the CALIFORNIA ASSOCIATION OF REALTORS®’ (C.A.R.).

“While home prices are predicted to temper next year, interest rates will likely rise and compound housing affordability issues,” said C.A.R. President Steve White. “Would-be buyers who are concerned that home prices may have peaked will wait on the sidelines until they have more clarity on where the housing market is headed. This could hold back housing demand and hamper home sales in 2019.”

“The surge in home prices over the past few years due to the housing supply shortage has finally taken a toll on the market,” said C.A.R. Senior Vice President and Chief Economist Leslie Appleton-Young. “Despite an improvement in supply conditions, there is a high level of uncertainty about the direction of the market that is affecting homebuying decisions. This psychological effect is creating a mismatch in price expectations between buyers and sellers and will limit price growth in the upcoming year.”

Outmigration, which is a result of the state’s housing affordability issue, will also be a primary concern for the California housing market in 2019 as interest rates are expected to rise further next year. The high housing cost is driving Californians to leave their current county or even the state.

According to C.A.R.’s 2018 State of the Housing Market/Study of Housing: Insight, Forecast, Trends (SHIFT) report, 28 percent of homebuyers moved out of the county in which they previously resided, up from 21 percent in 2017.

The substantial surge in homebuyers fleeing the state is reflected by the home sales decline in Southern California, which was down on a year-over-year basis for the first eight months of 2018. Outmigration will not abate as long as home prices are out of reach and interest rates rise in the upcoming year.

Here is their forecast from last year, with my skeptical comment on top: 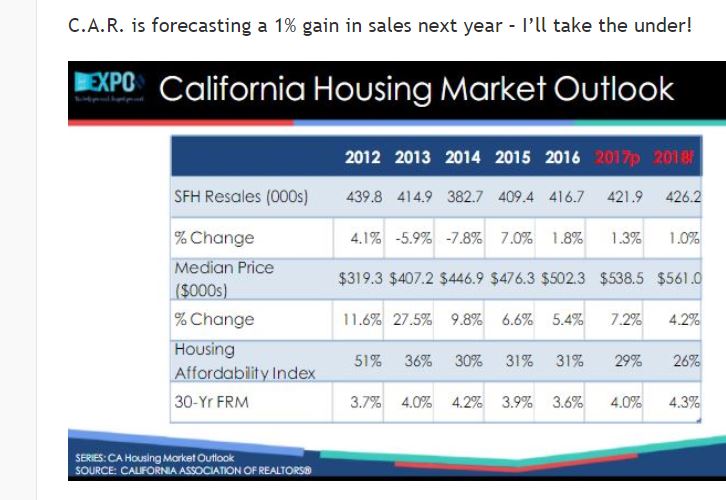