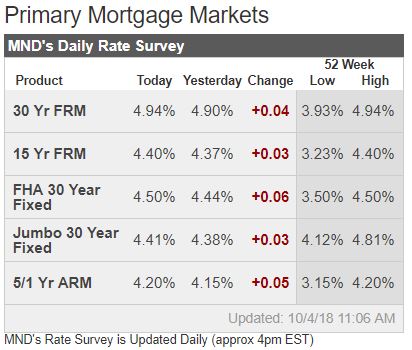 After today’s NFP report, we can say that 5% mortgage rates (no points) have arrived – sellers can offer to buy down the rate to help ease the pain for buyers.  Yesterday’s thoughts from MND:

So is it possible for bonds to see such a reversal?  Yes, but it’s equally possible that the pain continues.  Either way, it will likely be up to the market’s reaction to the big jobs report in the morning.  Traders aren’t necessarily as interested in the payroll count and unemployment rate as they are in the average hourly earnings data–the ingredient that lit the match on September’s rising rate powder keg.

Bonds’ “truly terrible, traumatic week” continued today with further losses ahead of September’s NFP report.  If that report shows strong job/wage growth, there’s no telling how much more rates will rise.  Conversely, it would take a staggeringly disappointing report to dissuade bond buyers.  It truly requires a pronounced penchant for risk to float here, and I, for one, don’t have that.  Lock now or relinquish your right to complain about high rates later if you don’t. –Ted Rood, Senior Originator

Rates continue coping with several big-picture headwinds, including: the Fed’s rate hike outlook (and general policy tightening), the increased amount of Treasury issuance to pay for the tax bill (higher bond issuance = higher rates), and the possibility that fiscal stimulus results in higher growth/inflation (which certainly seems to be the case so far in 2018).

While rates were able to recover and stay sideways in the summer months, September and October have seen a surge up to the highest levels in more than 7 years.

Upward pressure can continue as long as economic growth and inflation continue running near long-term highs.  Stay defensive (i.e. generally more lock-biased).  It will take a big change in economic fundamentals or geopolitical risk for the big picture to change.  Such things tend to not happen as quickly as we’d like.

Rates discussed refer to the most frequently-quoted, conforming, conventional 30yr fixed rate for top tier borrowers among average to well-priced lenders.  The rates generally assume little-to-no origination or discount except as noted when applicable.  Rates appearing on this page are “effective rates” that take day-to-day changes in upfront costs into consideration.