Ten Years After The Bubble 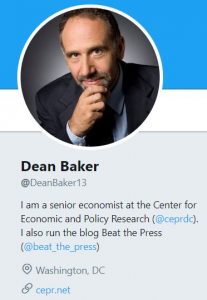 For those who study our housing bubble history, here’s a report by Dean Baker, a senior economist at the Center for Economic and Policy Research:

Link to his 31-page report

There is a very similar story with the risk of a housing bubble.

Real house prices nationwide are again considerably above their trend levels, although in real terms they are still 10–20 percent below their bubble peaks. However, unlike the bubble years, high house prices do not appear to be driving the economy. Residential investment is actually still below its long-term trend measured as a share of GDP. As noted with reference to the stock bubble, consumption is at moderate levels relative to disposable income, indicating a limited housing wealth effect.

Furthermore, this run-up in house prices does appear to be driven largely by the fundamentals of the market. Rents have been substantially outpacing the overall rate of inflation, especially in the markets with the most rapid increases in house prices, like Seattle and San Francisco. Also, vacancy rates have fallen sharply from the peaks reached in the recession, and are low in markets seeing rapid price rises.

There are some causes for concern in the current housing market. In particular, the bottom third of the housing market in several major cities is seeing the most rapid rate of price appreciation.

This raises the risk that many moderate-income homeowners may be buying into bubble-inflated markets, as happened in 2002–2007. That is potentially very bad news for these homeowners who may see their life’s savings disappear quickly if house prices fall 15 to 30 percent. That will not lead to a financial crisis since there is not enough money at stake in these mortgages (most of which are backed by either Fannie Mae, Freddie Mac, or the FHA), but it would be an unfortunate loss to these new homeowners.

Link to his 31-page report