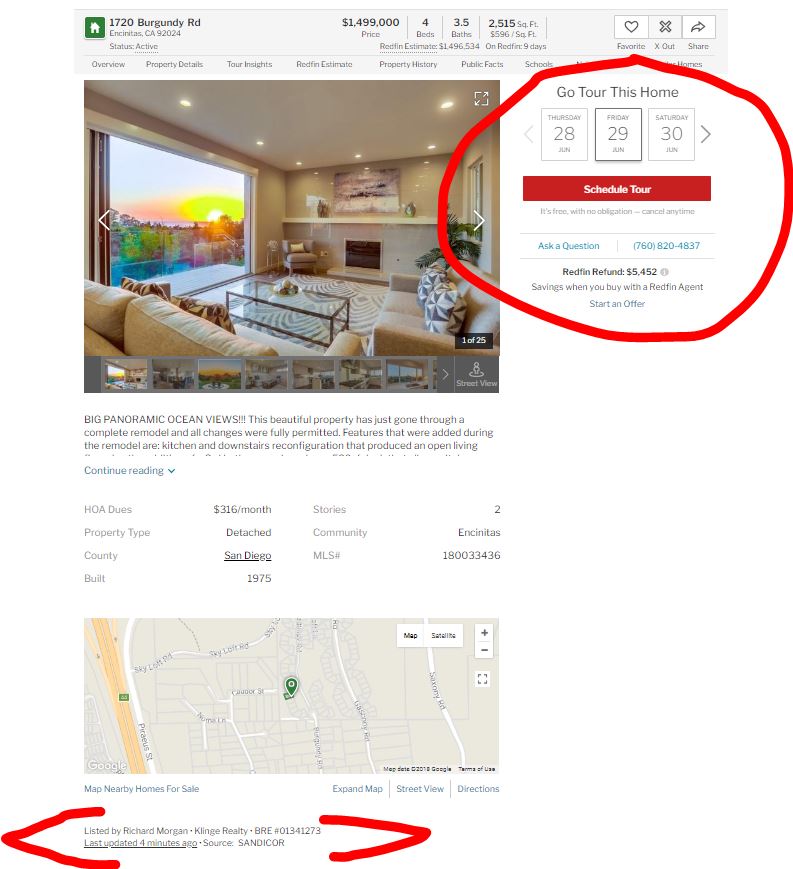 The thing that got me fired up was Glenn insisting that portals include a mandatory HTML link back to the listing agent (in fact, Redfin authored the new verbiage to be approved by N.A.R.).

The current rule is that the listing agent has to be mentioned, and Redfin includes the requirement in fine print at the bottom of each listing.  On the right, they pitch you hard to tour the home with them, which I’ll live with.  It’s their website, and if I don’t like it, I can always build my own.

Why does Glenn want the listing agents to get more exposure?

He says that if there is a link back to the listing agents, they will be more likely to input more listings onto the MLS, instead of ‘pocketing’ them.

He doesn’t supply any evidence to support such an idea, and it is unlikely that the listing agents who want to double-dip the commission will give it up easily.  This idea only makes sense as an alternative if we are going to eliminate pocket listings, Coming-Soons, and Sold-Before-Processings.

But nobody is suggesting an end to those techniques.

Since Zillow legitimized the Coming-Soon in 2014, major real estate brokerages and even some MLS companies have followed suit and offer their listings on their website prior to MLS exposure to the open market.  The Coming-Soon genie is out of the bottle, and adding a link back to the listing agent isn’t going to change it.

Is Glenn just an out-of-touch CEO hoping to befriend the industry?  No, he’s not, and we’ve seen previously that he has the killer instinct.  He said this HERE:

“I think he had no idea what kind of savage beast master he was dealing with,” Kelman said.  He continued: “We are wild, freaking animals. You can’t sell more houses for less money any other way. You’ve got to fight and claw for it.”

He owns one of the major portals. If he thinks putting an HTML link back to the listing agent is a good idea, then he should do it himself on Redfin’s website to demonstrate his commitment, and see how it goes.

But he hasn’t done that, which makes you think he is up to something else.  Just like everyone else in the industry, he wants to double-dip more of his own listings, so he can finally put that nickel in his investors’ pocket.