Nick at the WSJ has a good piece on the Tan Man – with one of Angelo’s emails from three years prior to the Countrywide failure and fire-sale to BofA: 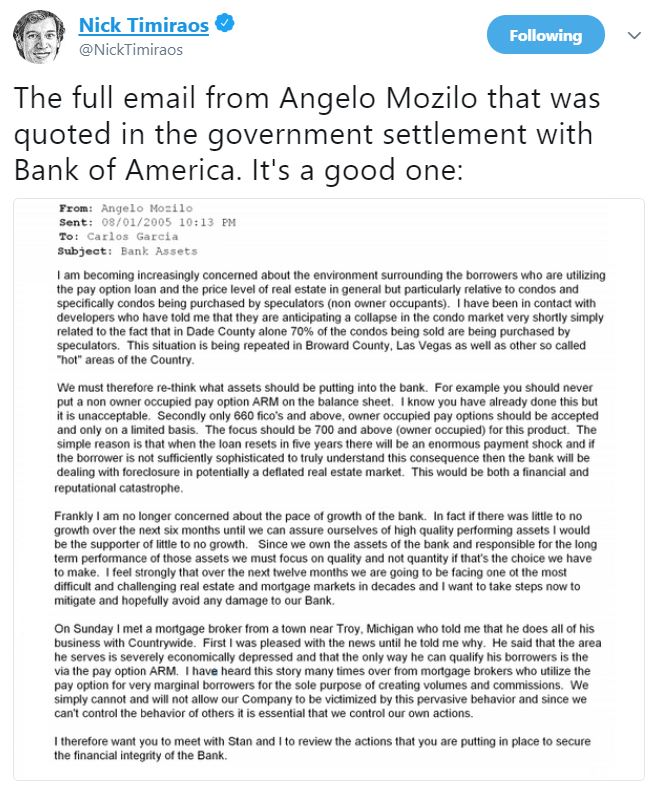 An excerpt from an old article:

Mister Mozilo, a mortgage industry maverick who co-founded Countrywide in 1969, and nearly 30 years later co-founded the dramatically collapsed IndyMac Bank (now OneWest Bank), is widely regarded as one of the more Machiavellian sub-mortgage-men who helped march the U.S. (and global) economy straight off the cliff in the mid-Noughts.

While Mister Mozilo and his mortgage-making army pushed and pedaled sub-prime home loans, he talked up the then-flourishing company’s stock price, earned hundreds of millions in compensation, and cashed out more than $400,000,000 worth of Countrywide stock, a large portion of it during the last couple of years of his tattered tenure as the king of Countrywide.

Alas, the sub-primed fueled real estate bubble burst sometime around 2007 and Mister Mozilo left Countrywide in 2008 after the crippled company was sold for $4.1 billion to Bank of America.

In June 2009 the Securities and Exchange Commission (SEC) charged Mister Mozilo with insider trading and securities fraud and in September 2010, Mister Mozilo settled with the SEC and agreed to pay $67,500,000 in fines, $45,000,000 of which was paid by Bank of America. Despite the sizable payout, settlement terms allow Mister Mozilo to circumvent acknowledgement of any misconduct. We can’t vouch for or confirm it but online idle chatter says he has a net worth well in excess of half a billion dollars.

Mozilo, in his deposition, continues his long standing defense of his former company.  “I have no regrets about how Countrywide was run,” Mozilo said. “We were a world-class company in every respect.“

“We never made a loan knowingly — and it would be stupid to do so — that we knew the borrower could not pay. Never,” Mozilo said. “All our loans had that one standard from 1968 to the end of my rein at Countrywide.”