Buy a House With An X? 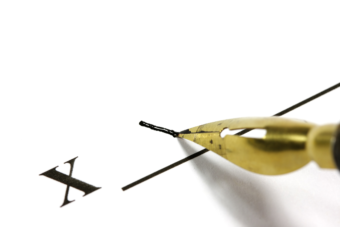 This is why electronic signatures are binding. Thanks daytrip!

Does it matter what you sign on contracts? Could you draw a picture or put an X and have it still be legally binding?

With so many facets of modern life being automated, signatures being easy to forge, and given how difficult it is to prove based on signature alone whether a given person actually signed something, using a person’s exact signature “design” for verification purposes after the fact is going the way of the Dodo.

This leads us to the question of the day – given all this, is there any rule about what exactly your signature has to look like? Can you, for example, just sign all your legal documents with a big X like they do in cartoons?

As it turns out, just like it’s possible to cash those big novelty checks because there’s no rule about what a check has to look like or be made of (just what information needs to be included), you can, in many regions of the world, sign a document in any way you wish. This is because a signature from a legal standpoint is just proof that you considered and accepted something. Or to quote the U.S.’ Uniform Commercial Code  §3-401(b):

A signature may be made (i) manually or by means of a device or machine, and (ii) by the use of any name, including a trade or assumed name, or by a word, mark, or symbol executed or adopted by a person with present intention to authenticate a writing.

In other words, even if you sign a document in the U.S. and many other parts of the world with a drawing, you’re still legally bound by the terms of that document because it’s the act of signing a document that matters, not the signature itself.

Coming back to the issue of signing something just using the letter X, you may have deduced by now that this is very much something you can usually do outside of specific cases where a given institution may not accept such. However, most will accept an X owing to the fact that this has long been a common way for illiterate individuals to sign a document. Other methods sometimes used by those who can’t write and haven’t otherwise come up with a scribble signature also include things like a simple drawing or in some countries a thumbprint is common. On this latter thumbprint “signature” style, while still not bulletproof, this certainly beats name signatures for later verification purposes, even for the literate.

Now, with regards to individuals who are illiterate or otherwise can’t read the language used in a contract, you may be wondering if they can really be legally bound by a document that they can’t even read even if they do sign it. It turns out, yes- from a legal standpoint it is the duty of the signing party to discern the terms of a contract before signing. Ignorance about some stipulation in a contract is not a legal way to get out of it, unless it can be shown that the other party was deliberately deceptive about the terms of the contract or that the contract itself was fundamentally different than what was expected.

While credit card companies do record and otherwise store these signatures electronically, there’s generally little point in anyone bothering to actually look at them. As Mastercard executive Carolyn Balfany notes, “accessing them is not a regular occurrence” unless the customer claims they didn’t sign for or buy something. But even then, again, the signature is often only a minor data point used to try to determine if a given purchase was actually fraudulent.

This laissez-faire attitude these companies take towards signatures today is a far cry from several decades ago when they generally hired huge teams of people to pour over the signatures, comparing them to the signed cards on file to ensure something like a check wasn’t fraudulent before approving the ultimate transfer of money. But in modern times, this security measure (and in a lot of respects a physical signature alone, even when talking more broadly about contracts in general) is simply completely outdated in its effectiveness to achieve the job it’s intended to do – offer proof you agreed to something. In the case of credit cards, even if cashiers bothered to check signatures at all, which most don’t, the signature does not provide any real hurdle to credit card thieves.

But to conclude, while certainly a given institution may have internal requirements with regards to your signature before they’ll accept some bit of paperwork or the like as valid, if you’ve ever had the bright idea to sign a different name or draw a smiling rocket powered unicorn with machine guns for teeth as your signature on a legally binding document to try to get out of the thing later, don’t expect this to help you in any legal way. At the end of the day, it’s the act of signing, not the physical scribbles you make, that matters from a legal standpoint.