An example of the tax-reform impact on the $1.2-million buyer, who we guessed might be affected the most from the recent tax reform:

Freddie Mac looked at the possible effects of the Tax Cuts and Jobs Act of 2017 in an earlier edition of its Outlook economic forecast. This month it takes that analysis granular – right down to two families, the Smiths and the Johnsons, both in the market to buy a house. The Smiths are a median income family living in Mississippi while the Johnsons are high income earners living in New Jersey. Each family has one kid and each plan to spend four times their income on a home.

The Smiths would see little impact from homeownership under the new tax law.

Freddie Mac quotes a study by Zillow that found only around 14 percent of homes in the U.S. are “worthy enough” for a new homebuyer to benefit from itemizing deductions; down from 44 percent under the previous tax rules. 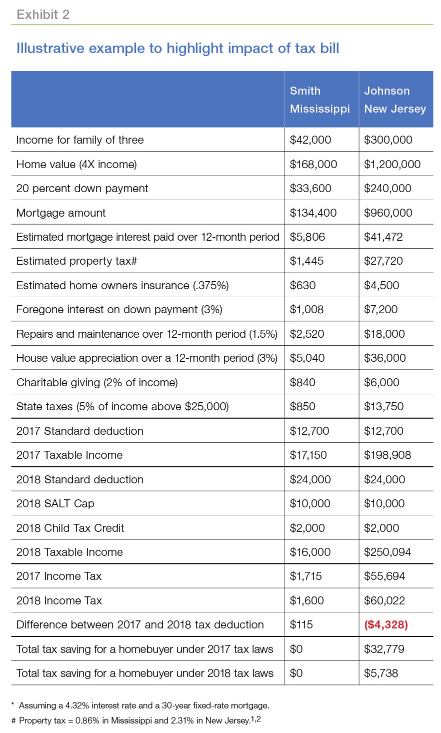 But the bottom line is that the new tax law does not stand in the way of the Smith’s homeownership decision, while for the Johnsons the tax savings from owning a home would go from $33,000 to $5,000. Freddie Mac speculated that the Smith family could put off buying a home for longer than if the tax bill had not been enacted.

If the entire amount of the lost tax savings were reflected by the same amount in lower home prices, that would be a 1 percent reduction in the Johnson’s market and much less in other parts of the country. However, economic models usually compare the user cost of housing with renting. If rents remain unchanged, then house prices may fall to reflect higher homeownership costs such as property taxes or higher interest rates.   Under the new law higher property taxes would further impact taxes among those who itemize (because of the cap) while higher interest rates would affect everyone.

Freddie Mac concludes that the direct impact of the tax bill will be limited in terms of national house prices. Certain markets with higher average incomes (and thus more households likely to itemize deductions) and property tax rates may see larger direct impacts on house prices ranging as high as around two percentage points. But the largest effect on prices will come through higher mortgage rates, which impacts all households irrespective of tax laws.

Freddie Mac’s economists also reviewed refinancing statistics for the fourth quarter of 2017.  Cash-out refinances, those transactions where the new mortgage balance was at least 5 percent higher than the old mortgage, represented 63 percent of the total, down from 89 percent in the previous quarter but still a significant increase from the 44 percent in the 4Q17.

The average reduction in interest rates enjoyed by those who refinanced first liens in the fourth quarter was 65 basis points. A year earlier the savings averaged 105 basis points.

Freddie Mac said the relatively low rate reduction (the average was 190 basis points in Q2 2013) reflects the high percentage of refinances for consolidating other debt or for home improvements. The average cash out amount over the last few quarters has been around $55,000.