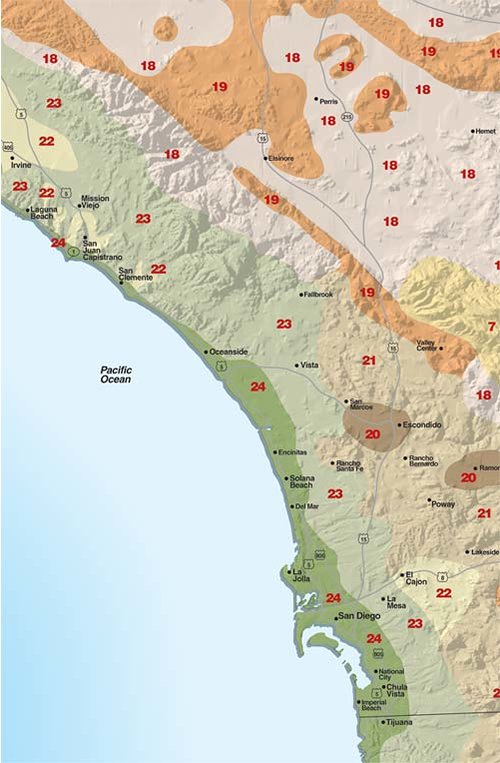 One of the most favored areas in North America for growing subtropical plants, Zone 23 has always been Southern California’s best zone for avocados. Frosts don’t amount to much here, because 85 percent of the time, Pacific Ocean weather dominates; interior air rules only 15 percent of the time. A notorious portion of this 15 percent consists of those days when hot, dry Santa Ana winds blow. Zone 23 lacks either the summer heat or the winter cold necessary to grow pears, most apples, and most peaches. But it enjoys considerably more heat than Zone 24—enough to put the sweetness in ‘Valencia’ oranges, for example—but not enough for ‘Washington’ naval oranges, which are grown farther inland. Temperatures are mild here, but severe winters descend at times. Average lows range from 43 to 48°F (6 to 9°C), while extreme lows average from 34 to 27°F (1 to –3°C).

Stretched along Southern California’s beaches, this climate zone is almost completely dominated by the ocean. Where the beach runs along high cliffs or palisades, Zone 24 extends only to that barrier. But where hills are low or nonexistent, it runs inland several miles.

This zone has a mild marine climate (milder than Northern California’s maritime Zone 17) because south of Point Conception, the Pacific is comparatively warm. The winters are mild, the summers cool, and the air seldom really dry. On many days in spring and early summer, the sun doesn’t break through the high overcast until afternoon. Tender perennials like geraniums and impatiens rarely go out of bloom here; spathiphyllums and pothos become outdoor plants; and tender palms are safe from killing frosts. In this climate, gardens that include such plants as ornamental figs, rubber trees, and scheffleras can become jungles.