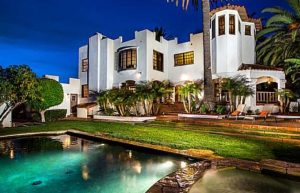 One of the first houses in Carlsbad was built here on Monroe – she says it was in 1929, and the tax rolls say 1931.  In the late-1990s there was a popular article that advertised about Carlsbad being full of old-Spanish style houses, and buyers would ask about them at open houses. But it was Oceanside that’s old enough to have had dozens of houses from this era.