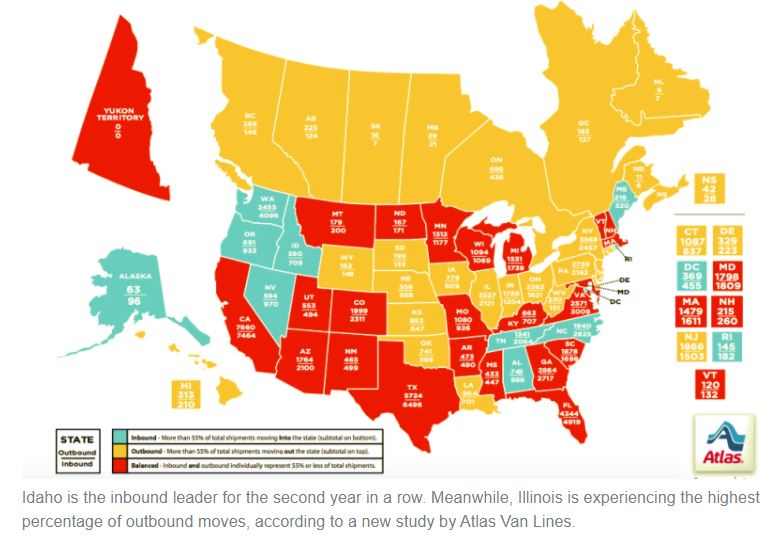 They show that we have a balanced number of in-bound and out-bound movers, without considering those who move but stay in California.  Glad they did mention that renters are ‘driving the decline’ – it seems like our market will survive the shuffle. Thanks Richard!

In 2017, there were 72,986 interstate and cross-border moves, down from 75,427 in 2016, according to a new study by Atlas Van Lines. Atlas has conducted its Migration Patterns study since 1993 to track the nation’s moving trends.

Overall, 23 states had roughly the same amount of people moving in and out. Idaho was the inbound leader for the second year in a row, with 65.1% of all moves coming into the state. The ‘Gem State’ has the fourth-cheapest cost of living in the country, according to the Council for Community and Economic Research’s 2017 index. Only Arkansas, Kentucky and Mississippi are cheaper.

Idaho, a mountainous state boasting 25 state parks, is experiencing booms in the fields of energy, science and tech. Californians seeking a slower pace and higher quality of life, in particular, are flocking to cities like Boise and Idaho Falls.

Meanwhile, the East Coast is a mixed bag, with Maine and Rhode Island attracting inbound movers (from previously balanced, meaning moves in and out of the state were about equal). This marks the second time Maine has been inbound in the past decade. New Jersey shifted from balanced to outbound, joining New York, which has been outbound for more than 20 years.

Charlynn Burd, a geographer with the Census Bureau’s Social, Economic and Housing Statistics Division, said housing cost-related reasons (43%) are the most frequently cited justification for moving.