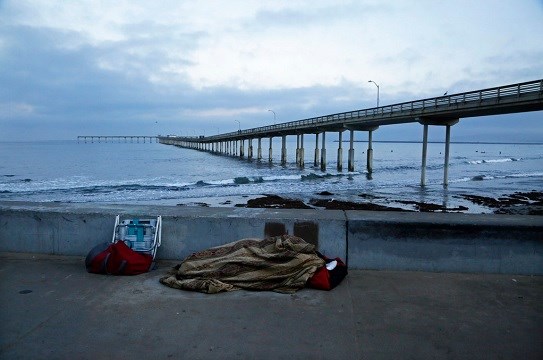 Rising rents are the main culprit of the growing homeless problem:

“I’ve got economically zero unemployment in my city, and I’ve got thousands of homeless people that actually are working and just can’t afford housing,” said Seattle City Councilman Mike O’Brien. “There’s nowhere for these folks to move to. Every time we open up a new place, it fills up.”

San Diego now scrubs its sidewalks with bleach to counter a deadly hepatitis A outbreak that has spread to other cities and forced California to declare a state of emergency last month. In Anaheim, home to Disneyland, 400 people sleep along a bike path in the shadow of Angel Stadium. Organizers in Portland lit incense at a recent outdoor food festival to cover up the stench of urine in a parking lot where vendors set up shop.

Homelessness is not new on the West Coast. But interviews with local officials and those who serve the homeless in California, Oregon and Washington – coupled with an Associated Press review of preliminary homeless data – confirm it’s getting worse. People who were once able to get by, even if they suffered a setback, are now pushed to the streets because housing has become so expensive.

All it takes is a prolonged illness, a lost job, a broken limb, a family crisis. What was once a blip in fortunes now seems a life sentence.