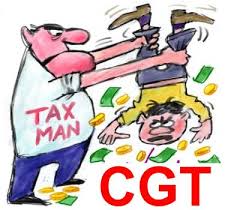 Examples of capital-gains tax – let’s use this as a marker in case the Trump plan goes through:

Dear Liz: We are in the lowest tax bracket. If we sell a capital gains asset worth several hundred thousand dollars, does that put us in a higher bracket and we pay 20% or do we remain in the lower bracket and pay 15%?

High-income taxpayers – those with taxable income above $466,950 – are in the 39.6 percent federal tax bracket, and pay a 20 percent long-term capital gains rate at the federal level, plus a 3.8% tax (in support of the Affordable Care Act for taxpayers with adjusted gross incomes over $250,000 for married couples and $200,000 for singles). The surtax is applied to the lesser of the taxpayer’s net investment income or the amounts over those limits.

It means a taxpayer at the highest federal tax bracket could pay as much as 37.1 percent — 23.8 percent federal plus 13.3 percent state — on a long-term capital gain in California.

There may be ways to alleviate or spread out the tax hit. You could sell losing investments to offset some or all of the gain. Another option for some assets is to sell a portion at a time over several years, or use an installment sale. A tax pro can walk you through your options.