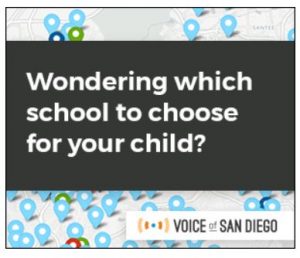 A new school map from VOSD – the high schools show the percentage of students who scored above 1500 on the SAT:

Last year, when California education officials were finalizing a plan to create a new school accountability system, parents and advocates had one big concern: The system wasn’t being set up to help regular families compare and contrast local schools.

Here’s a sampling of coverage and commentary from 2016:

From Edsource: “Parents on Thursday said they needed a simpler way to compare schools and understand how their schools are doing overall.”

From Innovate Public Schools: “Right now, the system makes it very difficult to compare schools, whether you’re a parent trying to find a school for your child or an elected leader trying to figure out which schools in your community need more help to improve.”

From the Union-Tribune editorial board: “(Gov. Jerry) Brown dismissed (Assemblywoman Shirley) Weber’s bill as “unnecessary” and duplicative of efforts of the State Board of Education, which recently adopted its own vague, confusing system to gauge school performance.”

Our staff was frustrated with the limits of the new system, too.

So we created this interactive map that incorporates the state’s data – along with other publicly available info – and presents it in a way that makes it easier to compare and contrast local schools.

San Diego Unified’s school choice window is currently open. It’s the period of time during which parents can apply to send their kids to a school other than the one that’s closest to them. If you’re a parent, explore the map to get a better sense of what each school offers, so you can feel confident you’re making an informed decision.