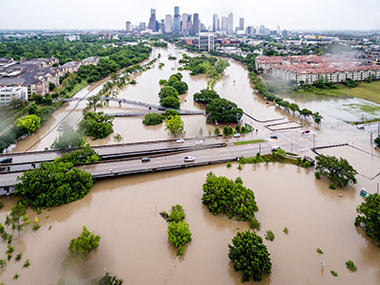 Hat tip to Giorgio, a Houston native, for tweeting this article:

The area’s history is punctuated by such major back-to-back storms, but many residents say they are becoming more frequent and severe, and scientists agree.

“More people die here than anywhere else from floods,” said Sam Brody, a Texas A&M University at Galveston researcher who specializes in natural hazards mitigation. “More property per capita is lost here. And the problem’s getting worse.”

Why?  Scientists, other experts and federal officials say Houston’s explosive growth is largely to blame.

As millions have flocked to the metropolitan area in recent decades, local officials have largely snubbed stricter building regulations, allowing developers to pave over crucial acres of prairie land that once absorbed huge amounts of rainwater. That has led to an excess of floodwater during storms that chokes the city’s vast bayou network, drainage systems and two huge federally owned reservoirs, endangering many nearby homes.

The region was once home to acres of prairie grass whose roots extended far underground, with a capacity to absorb water for days on end or even permanently. Most of that land has now been paved over. The Katy Prairie northwest of Houston was once about 600,000 acres of flood-absorbing land; recent development has reduced it to a quarter of that capacity, according to estimates from the Katy Prairie Conservancy, an advocacy group.

That means the rain is now falling on what are called impervious or impermeable surfaces, like concrete, preventing the ground underneath from absorbing it. So the rainfall becomes “runoff,” traveling to wherever is easiest for it to flow. The water might flow to a nearby stream, but on its way the water could flood homes, cars and businesses, or the stream might be overwhelmed by that water, causing more flooding nearby.