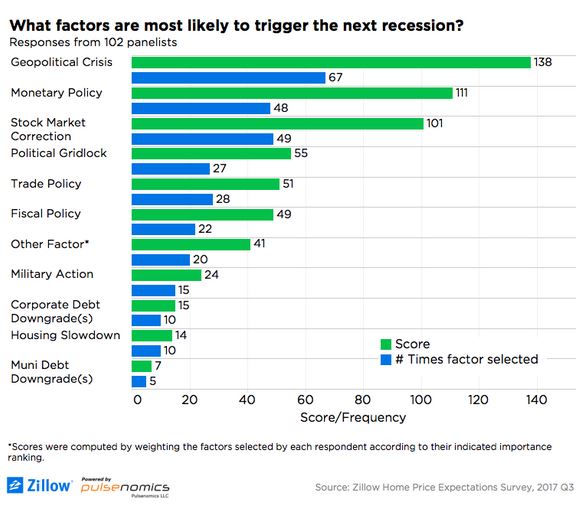 Home values continue to climb, passing $200,000 in June for the first time ever. A panel of more than 100 real estate economists and experts expect that trend will continue – while they say, on average, that there’s a 52 percent probability of the next recession starting by the end of 2019.

The probability jumps to 73 percent for a recession starting by the end of 2020, according to the Q3 2017 Zillow Home Price Expectations Survey (ZHPE), a quarterly survey sponsored by Zillow and conducted by Pulsenomics LLC. The latest survey was conducted in late July and early August.

Most of the panel’s experts (67) think a geopolitical crisis is likely to be a major trigger for the next recession. That would be a rare occurrence. Although the terrorist attacks of Sept. 11, 2001, prolonged a recession, most sustained downturns – including that one – have not started with a geopolitical crisis.

The panel ranked likely triggers as 1, 2 and 3 – and with that weighting, a geopolitical crisis also came out ahead, with a score of 138. It was higher than a score of 111 for monetary policy, 101 for a stock market correction and 55 for political gridlock as other possible recession triggers.

On average, the group expects the next recession to have only a moderate impact on U.S. housing. The group said San Francisco and Miami would be the most affected, followed by Los Angeles, New York, San Diego and Seattle. 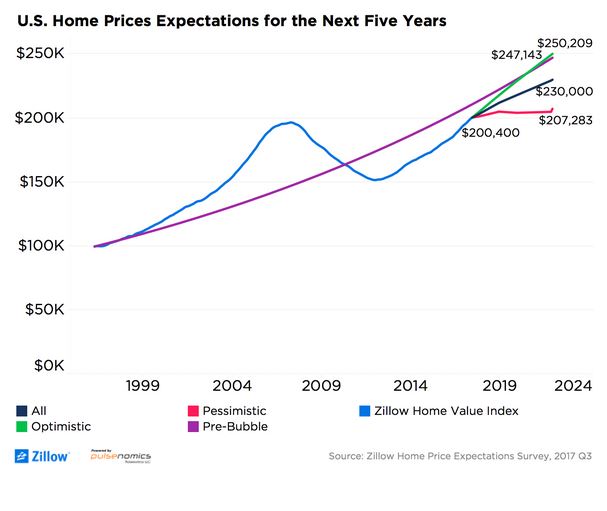