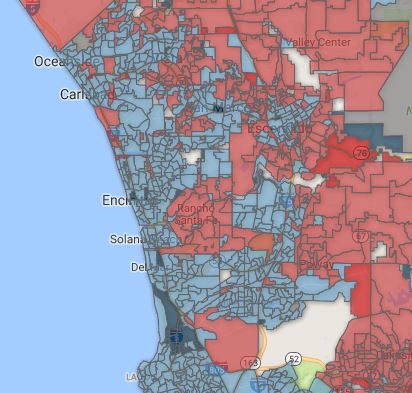 Just before the election, real estate site Trulia asked voters how they felt about the possibility of buying a home in 2017. Then, after it all went down, they asked again a few weeks later.

If you’re looking to sell a house in places like West Virginia, Texas, or certain parts of Pennsylvania, the results were encouraging. Less so in the Bay Area.

The report doesn’t mention how those with no affiliation to either party feel. Trulia economist Ralph McLaughlin tells Curbed SF that, in general, independent and third party voters seem to have grown discouraged, although it’s hard to tell whether the dip is statistically significant.

On one hand, this would appear to be terrible news in San Francisco, where Democrats run the show and where Bay Area voters were part of the most vigorously anti-Trump turnout in the entire country.

On the other hand—actually, there is no other hand. Almost no one seems to be able to foresee a potential future in which the Trump administration is not at least a little bad for San Francisco’s market.

Those in an optimistic mood could point out—correctly—that this is mostly speculation.

While local voters (and home buyers) feel down in the dumps about the future, when push comes to shove they might still do what they would have anyway in a highly volatile market.

But that’s the thing: It’s not exactly encouraging when the likely best case scenario is just breaking even.

Interestingly, most of the analysts cited above noted that despite his extensive background in real estate, the president-elect didn’t articulate any housing plans during the campaign.