by Jim the Realtor | May 16, 2016 | Bailout, CA Homeowners Bill of Rights, Jim's Take on the Market, No-Foreclosure as Banking Policy | 4 comments 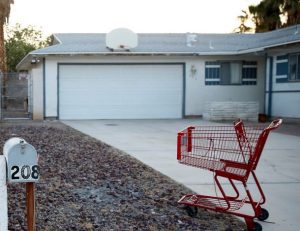 Collateral damage from the on-going No Foreclosure era – hat tip to Richard!

LAS VEGAS — On a drive through this desert city, the blight from the housing collapse of eight years ago can be seen on almost every block: Overgrown yards and boarded-up windows identify the foreclosed and abandoned homes that still pockmark southern Nevada.

But not all of the dwellings are empty.

Squatters have descended on every corner of the Las Vegas Valley, taking over empty houses in struggling working-class neighborhoods, in upscale planned communities like Summerlin, and everywhere in between. And they often bring a trail of crime with them.

While some unauthorized tenants are families seeking shelter, police officers here say they are more frequently finding chop shops, drug dealers and counterfeiters operating out of foreclosed homes. One man who the police say was squatting has been charged with murdering a neighbor during a burglary.

But with a transient population of down-and-out gamblers and a glut of homes that have already been foreclosed, opportunists can still take their pick of thousands of empty houses. Inside one, squatters had scrawled a warning to stay away on a wall: “Violent tweekers on guard.”

In North Las Vegas, Deborah Lewis has seen just about every kind of squatter at the house next door since the owners walked away four years ago.

First, two women said they had just bought the middle-class home, but they stole water from the neighbors’ outdoor spigots at night, because like most abandoned homes this one had no running water. Then came a group of counterfeiters, who left their printing materials visible from the window, Ms. Lewis said. Later groups tore out the stove, refrigerator and copper wire; broke windows; and burned the kitchen floor. Since water at the house had been shut off, they left feces all over one room, a common problem that creates health hazards. (For electricity, those who can afford it can set up accounts with the power company; those who cannot often run wires to nearby utility boxes.)

“It’s been a total circus — you name it, we’ve had it next door,” Ms. Lewis, 58, said. “It’s scary, because you don’t know if these people are packing. One guy came over here, and he was looking in our window. Scary.”

But squatters are getting creative as well. Some repair broken windows and other damage from past squatters, pretending they own the place, neighbors say. At least one group of alleged squatters filed a federal lawsuit in an attempt to keep possession of the $800,000 home in the hills they were occupying, with its pool and views overlooking the Strip. (Repeated calls and knocks on the door at that house went unanswered, even though four people were visible in the living room. The police raided the house and arrested four people on Wednesday.)

In North Las Vegas, Officer Scott Vaughn has investigated 80 squatting cases so far this year, and said he had seen everything: prostitution rings; teenagers using vacant homes for parties; and even a squatter who tried to pull a Jedi mind trick.

“He was staring at me and telling me, ‘You don’t want to arrest me. You want to let me go,’” Officer Vaughn said. “I said, ‘The Force is not on your side today. You’re going to jail.’”