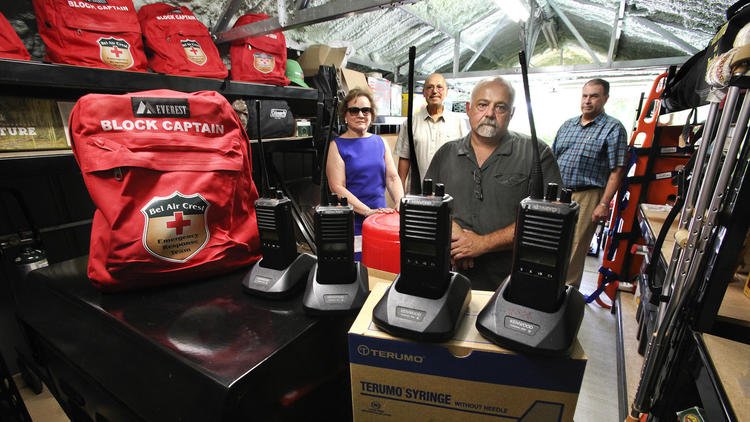 Tucked beneath green tennis courts in a hidden corner of Bel Air Crest, a 10-by-20 shed holds enough emergency equipment to stock a small hardware store — a 13,000-watt tri-fuel generator, a satellite phone and neatly organized boxes of medical supplies.

And then there’s the eight portable toilets with pop-up privacy tents.

“You can’t have 1,500 people not able to go to the bathroom,” said Marsha Hierbaum, president of the Bel Air Crest Homeowners Assn.

The shed represents one piece of a years-long effort to ensure all residents of this gated community are ready when the “Big One” hits. In a city populated by people expecting — but many ill-prepared to handle — a major earthquake, it is the affluent and organized hillside neighborhoods that have taken emergency preparedness to the extreme. A 6.0-magnitude earthquake that rumbled through Napa last month underscored for some how important their effort is.

Local residents have long understood that living on winding, narrow roads means they could be on their own when disaster strikes. So they have taken safety into their own hands.

Although Bel Air Crest has fewer than 300 homes, the homeowners association has spent about $50,000 on emergency supplies and equipment over the last three years, including the purchase of a 2,000-gallon water truck. A core group of about a dozen nearby Bel Air Ridge residents has met monthly for more than 20 years to discuss emergency response. And leaders in Beverly Glen recently installed a repeater in a resident’s backyard to help ensure their hand-held radio system will work up and down the neighborhood’s canyons.

First responders “won’t get to us,” Bel Air Crest Operations Manager Rick Cole said. “My board of directors was wise enough to set aside some money each year, and we slowly built up this inventory of supplies so we would be self-reliant.”

The Los Angeles Fire Department’s Community Emergency Response Team program advises locals to store enough food and water to last at least three days after a disaster. Depending on the scale and location of the damage, fire officials say, the wait for help could be even longer.