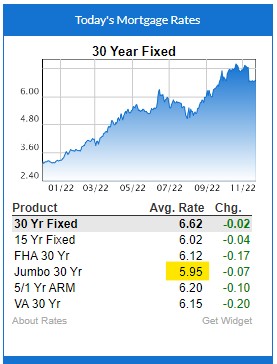 Excitement, volatility, non-stop action… concepts that have absolutely nothing to do with mortgage rate movement over the course of the past two weeks.  In fact, since rates plummeted in response to the November 10th CPI data, they’ve been as flat as we’ve seen in 2022.

This is the goal for financial markets and mortgage rates as they traverse a time frame like the Thanksgiving holiday, but it’s also a byproduct of relevant events.  Specifically, inflation data dominates the landscape.  It was no surprised to see a big reaction to the CPI data 2.5 weeks ago, and markets may largely be waiting for the next installment before the next substantial shift in rates.

This doesn’t mean rates will remain as flat as they have been–only that they may resist moving too far in either direction until they have more guidance from economic data and the Fed.  This week will bring some of that economic data, but the next CPI report arrives on December 13th followed a day later by the next Fed announcement.

Fed speakers were making the rounds today reminding markets that there are more rate hikes to come.  The Fed sees the strength of the jobs market as providing a cushion to be aggressive in its fight against inflation.

While the Fed will almost certainly continue to hike rates on the 14th (probably by 0.50%), financial markets have long since baked that assumption into current trading levels.  That means today’s mortgage rates already account for the current Fed Funds Rate forecasts.

Even then, the Fed Funds Rate doesn’t dictate mortgage rates and is an imperfect indicator for rate momentum. Longer term rates like mortgages and 10yr Treasury yields typically begin falling sooner and by larger amounts in any given rate cycle. The past few weeks could be the first phase of that typical pattern (10yr Treasuries have dropped 0.30% versus 2yr Treasuries since then), but again, the continuation of that pattern depends on confirmation from upcoming inflation data.