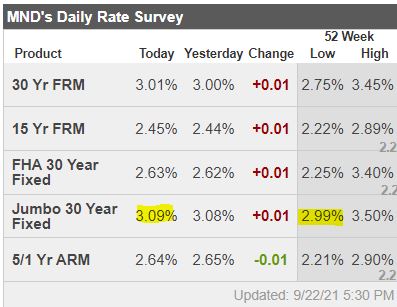 From Mortgage News Daily – thank you:

Mortgage rates were surprisingly steady today as the bond market reacted to a new policy announcement from the Fed. Perhaps “reacted” is the wrong word considering the market’s response.  Specifically, the bond market (which dictates interest rates on mortgages and beyond) was hard to distinguish from most any other random trading day.  That’s nothing short of impressive given what transpired.

So what transpired?  That requires a bit of background, but let’s make it quick.

Today’s announcement advanced the verbiage that suggests the Fed will begin tapering at the next policy meeting in November.  Then, in the post-meeting press conference, Fed Chair Powell bluntly and explicitly confirmed the Fed is indeed planning on announcing the tapering plan at the next meeting unless the next jobs report is surprisingly bad.

Bonds definitely experienced some volatility during today’s Fed events, but again, that volatility existed within a perfectly normal range.  The absence of a bigger market reaction is a testament to the Fed’s transparency efforts.

In short, they ended up saying almost exactly what they’ve been telegraphing in the past month of speeches, and markets revealed themselves to be positioned for an “as-expected” result.  So not only was the Fed transparent, but markets were also fully betting on that transparency.  Relative to some of the drama in 2013, today amounted to a perfectly threaded needle of epic proportions.

What does it mean for mortgage rates?  Today?  Nothing really.  Lenders barely budged from yesterday.

All of the above having been said, sometimes it takes a few days for post-Fed rate momentum to truly kick in.  Additionally, we’d expect some of today’s potential impact to instead be seen in the wake of the next jobs report on October 8th.