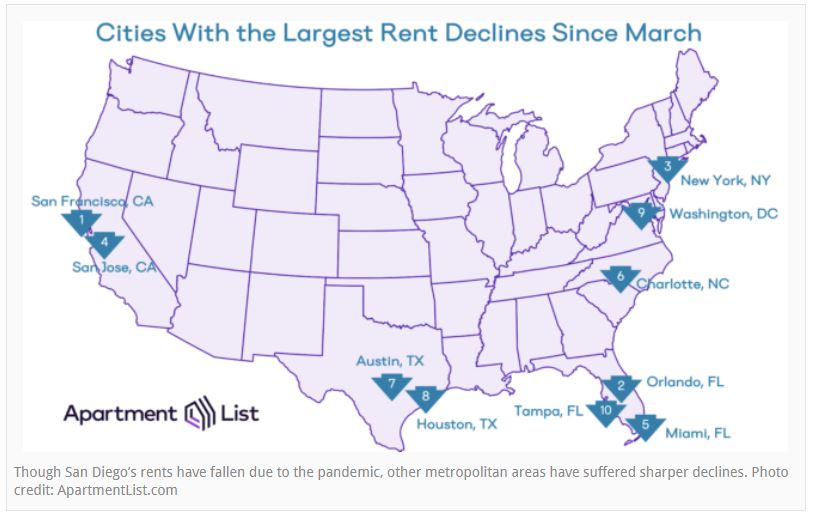 When an average or median price is moving less than 1%, let’s call it unchanged.

San Diego, which saw rent increases slow last year after a period of skyrocketing costs, continues to absorb drops following the start of the coronavirus pandemic.

ApartmentList.com, in its National Rent Report for June, reported that in the region, median rent stands at $1,573 for a one-bedroom apartment and $2,041 for a two-bedroom. Affordability remains an issue for county renters. The national median for two-bedrooms, by comparison, is $1,192.

The researchers noted that the pandemic “put a halt to normal moving activity.” That, combined with job losses, has “dampened the demand for rental housing across the country.”

“The economic fallout from the pandemic does not appear on track for the quick V-shaped recovery that many had originally hoped for,” the researchers wrote. “and this economic weakness is reflected in our rent data.”

This is normally peak season for rental activity. From 2014-2019, rent growth from March to June in San Diego averaged 1.2%.

North County rents are up sharply, year-over-year. The median price for a two-bedroom in Oceanside rose to $2,351. Though rents in Carlsbad fell the most, by .3% in the last three months, median rent for two-bedrooms there remains the most expensive in the county at $2,540.

Median rent in National City is the most affordable for a two-bedroom, at $1,323. It has fallen .8% in the last year, but just slightly since May.

Link to Times of San Diego