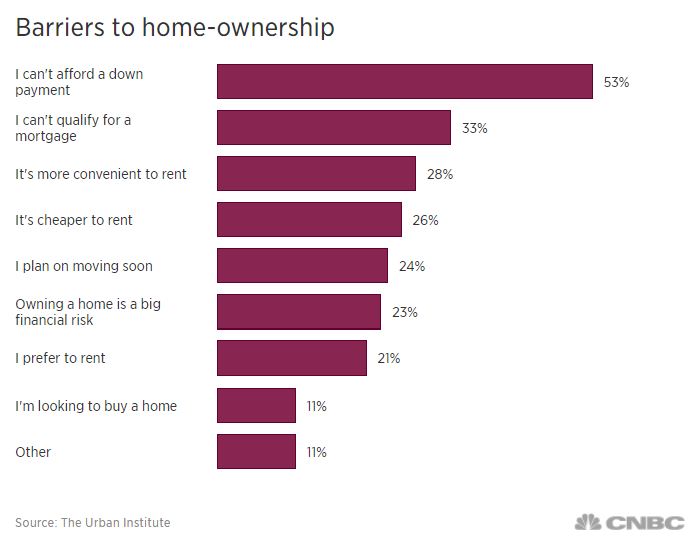 Cassidy Claire Risien, 34, is an actor and artist living in Los Angeles but, even with her day job as a spin instructor, her budget is tight.

Despite that, she lives in a newly renovated townhouse in trendy Venice, California — just seven blocks from the beach.

“I had been living by myself and it was no longer sustainable,” she said. In an online search for rentals in her area, she set the price range to its lowest setting and a communal living, or co-living, option popped up among the results.

Now Risien pays less than a $1,000 a month to live at Haven, a co-living community.

Co-living spaces bring together a group of people, likely strangers, in a shared space. Often, there are private sleeping quarters but the kitchens and work areas are communal spaces.

For many like Risien, sluggish wage growth and sky-high rents in many cities have made it unaffordable to live alone.

That’s partly why, since the Great Recession, more young adults are still living with their parents than on their own, according to the Pew Research Center.

“Many of us thought that during the recovery, as the job market improved, the shared living with their parents would peak and start falling,” said Richard Fry, a senior researcher at Pew Research Center. “That has not happened yet.”

Meanwhile, the number of people living with an unrelated roommate has declined since 1995, according to Fry.

Co-living is another alternative to sharing a home with mom and dad.

As rents continue to rise, more people are looking beyond websites like Craigslist for a shared living arrangement that offers lower costs and better perks. As a result, the number of co-living offerings has expanded dramatically in the last few years.

For instance, WeWork opened two locations under the shared-living brand WeLive in the U.S. Its apartments in New York range from studios to four-bedroom units, and typically cost less than similar buildings in the neighborhood.

In general, though, co-living tends to give you less personal square feet and a more flexible lease term.

Other companies like WeLive, including Haven, Common, Ollie and Quarters, use the same basic model of short-term rental contracts with shared common spaces and other incentives such as housekeeping, high design and a social atmosphere.

In some cases, the perks are so great that residents pay a premium to live there.

At Haven, the focus is on health and wellness, and residents are encouraged to share their specialty, whether that’s teaching a yoga class or cooking lessons in one of the four chef’s kitchens.

In return, the rent is reduced to $995 a month, including linen and towel service and streaming entertainment subscriptions such Hulu, Netflix and Amazon Prime.

Haven’s CEO Ben Katz likens it to a private membership club — “like Soho House, but you live with us,” he said, referring to the exclusive, London-based 27-property club and hotel chain.

There are about 96 active members living among Haven’s four townhouses, with a communal courtyard. But here, there are no private living quarters. Rather, there are roughly four people to a bedroom and each have their own individual sleeping pod.

While that arrangement is not for everyone, Risien, for one, loves it. “I initially planned to stay for six months but I can anticipate myself staying for a long time,” she said.

“There’s a part of me that wonders how long I can stay.”