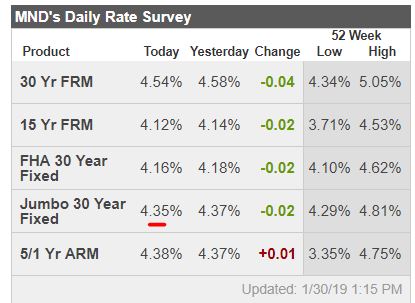 Rates with no points

It sounds like mortgage rates will be rangebound for the foreseeable future, which is good for buyers – but not necessarily for sellers.  Without the threat of rates going higher, buyers will be even more patient:

It’s true that markets were already expecting a dovish Fed announcement.  This created an asymmetric risk that the Fed would only be as friendly as they needed to be and that rates would have been positioned too low for such a thing.  As it happened, however, the Fed was noticeably friendlier than most anyone guessed.

They dropped their verbiage pertaining to additional rate hikes.  This effectively begins an era where rates will remain at current levels until economic data or other considerations motivate a change.  Big news indeed!

They also dropped the reference to economic risks being balanced.  The only way to be any friendlier to bonds would have been to say that economic risks had tilted to the downside (which can already be inferred from this change).

They also said they were prepared to adjust the balance sheet normalization policy if needed (i.e. they could start buying MBS again).  Unsurprisingly, MBS liked this news and improved at a faster clip than 10yr Treasuries.  Part of the 10yr’s problem was the big advantage the Fed’s announcement provided for shorter maturity Treasuries.  In other words, traders were buying Treasuries, but most of the love went to the 2-5yr sector.

In the bigger picture, this is just another decently-sized green day for 10yr Treasuries, but reading between the lines, there’s a bit more to like.  For MBS, it was easily the best day since January 4th.  Not only that, but there’s a chance we look back at this as the day the Fed confirmed the end of the rising rate environment of the past 2 years.  Granted, the past 2.5 months already did quite a bit in that regard, but it’s going to take a bit more time and stability to get comfortable with that idea. 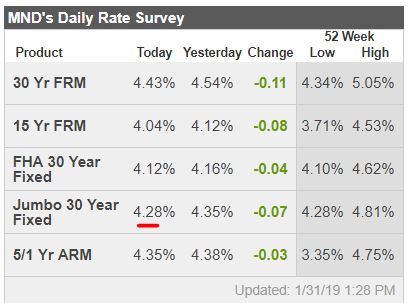