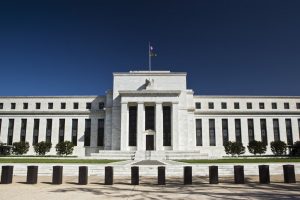 The Fed raised their federal-funds rate by 1/4% as expected today, and mortgage rates showed their usual indifference:

In one sentence, today’s Fed rate forecasts pushed bonds into weaker territory at 2pm and Jerome Powell’s press conference helped to recover most of the losses.

The forecasts showed a slightly higher probability of 4 rate hikes in 2018.  The average “dot” (so named for the dot plot on which the forecasts appear) also moved a hair higher in 2019 and 2020.  This was the key market mover at 2pm, even though the Fed announcement was heavily edited from its previous version.  It probably didn’t help that most of the edits were easier to argue as “unfriendly” for bonds.  That said, it would be harder to argue they were unexpected or unjustified.

Powell’s press conference saw bonds bounce back and recover most of the losses, starting at 2:30pm.  He said he wasn’t at all concerned about inflation getting out of control, and he was so pleased with the strength of the economy that it doesn’t really leave room for anything other than disappointment or the mere meeting of expectations.  The tacit implication is that Fed policy is as tight as it’s going to get.  Or rather, the trajectory of Fed policy isn’t going to get any more onerous for bonds–a fact that was driven home by Powell saying we’re getting closer to a “neutral Fed funds rate.”

The ECB is up tomorrow morning, with just as much market movement potential as the Fed.  Their announcement is out at 7:45am, but the bigger to-do is typically the Draghi press conference which begins at 8:30am.