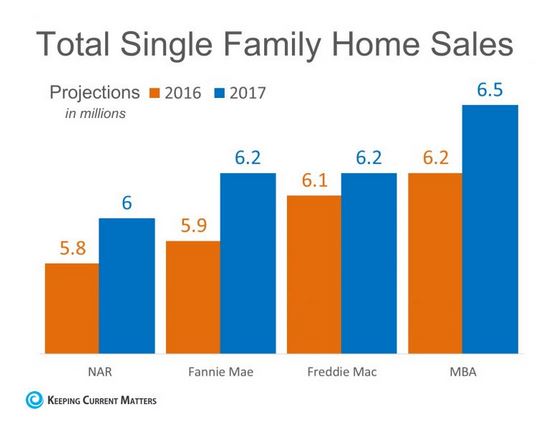 We can expect a hot year for home sales in 2017, according to recent forecasts from the National Association of REALTORS®, the Mortgage Bankers’ Association, Freddie Mac and Fannie Mae, and more.

NAR is predicting existing-home sales to reach 6 million in 2017, higher than its 5.8 million forecast for this year. But other entities are even more bullish. MBA is predicting home sales to eclipse 6.5 million next year, while Fannie Mae and Freddie Mac are both predicting 6.2 million.

A huge wave of Generation Yers, who have delayed home buying, are emerging into their key buying years. They are predicted to keep home sales and condo sales strong well into 2020, according to economists.

The top markets for price appreciation likely will be in Seattle, Wash.; Portland, Ore.; Denver, Colo.; and Boston, predicts Eric Fox, vice president of statistical and economic modeling at VeroForecast. These markets’ robust economies have growing populations but a tight supply of homes for sale on the market that will likely lead to some of the largest price increases across the country.

Meanwhile, new-home construction starts likely will tick up to about 1.5 million per year to 2024, predicts Forisk Research.

Home builders likely will continue to be more subdued, despite calls for more inventory.

“Home builders behavior likely is a continuing echo of their experience during the crash,” Pantheon Macro Chief Economist Ian Shepherdson told MarketWatch. “No one wants to be caught with excess inventory during a sudden downshift in demand. In this cycle, the pursuit of market share and volumes is less important than profitability and balance sheet resistance.”

Nothing but blue sky ahead, according to the big kahunas of real estate sales. In spite of tight credit and affordability issues, they all believe that we will sell over 6 million homes in 2017?  How often has that happened?  Only during the rah-rah days of exotic financing in 2005-2006:

The highest reading this year was 5.57 million, and today’s current pace is around 5.33 million sales, and stumbling.  And they think Generation Yers will save the day, and cause home sales to rise at least 10% next year?

Note how wrong they were with their 2016 forecasts in top chart!