We’ve been big fans of Tom since he came back to SD:

We’ve touched on the new disrupter OpenDoor, which is currently operating in Phoenix and Dallas (places where home values might be easier to determine):

They are willing to pay cash for your house and close in three days, which sounds enticing for those sellers looking for instant cash.  But they offer to buy your home at a below-market price based on algorithms, and fees range from 6% to 12%.  They are glorified flippers.

The length of time it takes to close escrow should have improved by now.  It still takes 30-45 days to process a sale, which might be advantageous for sellers who occupy the home – they usually need time to pack it up.

But for those sellers of vacant homes, or those who want to use their proceeds to purchase another home, a quick escrow might be preferred.

Thankfully, there are new alternatives.

Quicken is offering the Rocket Mortgage, and yesterday Caliber Home Loans rolled out their new product that can close a regular sale in 10 days or less:

These options should stop sellers from getting their head tore off just because they want a fast closing. These mortgage products could also really help the move-up market by alleviating the struggle of making offers contingent upon the sale of your current residence.

The regional VP of Caliber told me that their process is very innovative.  They do not require the buyer to bring in the usual documents.  Instead, they are getting them directly from the institutions themselves, which will help ensure accuracy.  The IRS will furnish Caliber with income documentation, and the funds for closing will be verified directly with the banks themselves.  The appraisals will be computer-generated in areas where you have easier valuations, like in Carmel Valley and Carlsbad where there are newer tract houses that are very similar.

We are close to being able to get a mortgage with the swipe of your ID card!  It could invigorate the move-up market in 2017 – and Trump will get the credit! 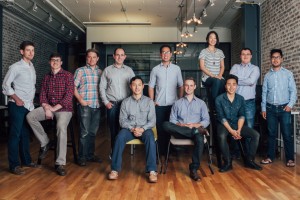 Remember last time? When you don’t have mortgage underwriters being strict with the money, you are entering bubble territory:

Chicago-based Ben Walhood used to sell brain surgery equipment; on the side, he flipped a few houses.

“When I had the W2 and a good income, getting a mortgage was relatively straightforward,” he said.

But when the flipping profits grew, Walhood, 33, decided to go into it full time. Without the sales job, though, he had no W2, and that’s when the money dried up.  “At that point it was essentially impossible to get funding from the big banks,” he said.

Walhood turned to San-Francisco-based RealtyShares, one of a growing breed of crowdfunding platforms. Essentially, it is an online marketplace for real estate investing, where individual investors can open a free account and access investments in properties across the country. They need a minimum of $5,000 to invest and must be accredited, which includes either an annual income exceeding $200,000 or a net worth of over $1 million.

Walhood would get his property purchases funded by this “crowd” of investors, who would lend him the money. As with a mortgage, he pays interest on the loan, and the investors get about a 9 percent return. Once each property is sold, the loan and the investors are paid off.

“This gap has been left by banks that now crowdfunding platforms, like RealtyShares, are able to fill,” said Nav Athwal, CEO of RealtyShares. “They are able to provide quicker, more efficient capital that helps meet the needs of these investors who are looking for speed of execution and the ability to be flexible with their terms as well as with the underwriting standards. Banks just aren’t meeting that need.”

Alternative titles could be, “Be careful when buying a house on a slope”, or “Flippers can be good guys too”.  I saw this at Tom Tarrant’s feed because they used one of his Texas-flip photos in the beginning, though he isn’t featured:

It was (re)listed for $12,980,000 three weeks ago, and is now marked pending.  It was probably assisted by the two La Jolla oceanfront listings that hit the market this week – both over $20,000,000.  Or by Romney living next door?  Maybe he picked up another piece!

This comment was left at the cnbc site about high-end flipping – I’m seeing the same thing around San Diego:

Article is behind, this is already slowing down here in Orange County – a lot of the properties are starting to sit on the market for awhile.

Thanks to daytrip for sending this in:

Markets with the best return on flips in the second quarter included Pittsburgh (106 percent), New Orleans (76 percent), Baltimore (73 percent), Virginia Beach, Virginia, (66 percent) and Daytona Beach, Florida (63 percent). Metro areas with the highest dollar amount of average gross profit on home flips included San Jose, California, Washington, D.C., San Diego, Los Angeles and Seattle, all of which had an average gross profit of more than $100,000 per flip, according to RealtyTrac.

In areas with fewer new-home tracts, the flippers are helping to fill the void by providing a like-new product – expect them to stick around!

The Valley of the Sun looks like the flipping capital of the USA, but considering the population differences, Douglas County has about 5x more flips per person.

The list of counties with the most flips over the last year (April to March):

Hat tip to reader Just Some Guy for sending in this article:

With home values recovering from the Great Recession and the fix-and-flip market drying up, what’s a real-estate investor to do?

In Southern California, American Coastal Properties is going for the high end.

Instead of focusing on buying bank-owned homes from auction, fixing them and selling them for a gain, the five-partner group formed in 2012 buys older homes in affluent areas like La Jolla, Del Mar and Solana Beach, guts them, adds square footage and hopes to sell them for a gain. It’s a risky business that can reap hundreds of thousands of dollars in rewards, but also can bring unwelcome surprises that take a chunk out of any profit.

END_OF_DOCUMENT_TOKEN_TO_BE_REPLACED

The MLS shows that 11% of the 1Q14 residential sales in SD County were REO and short sales, and this article shows 7.1% flips (hat tip to SD Squatter):