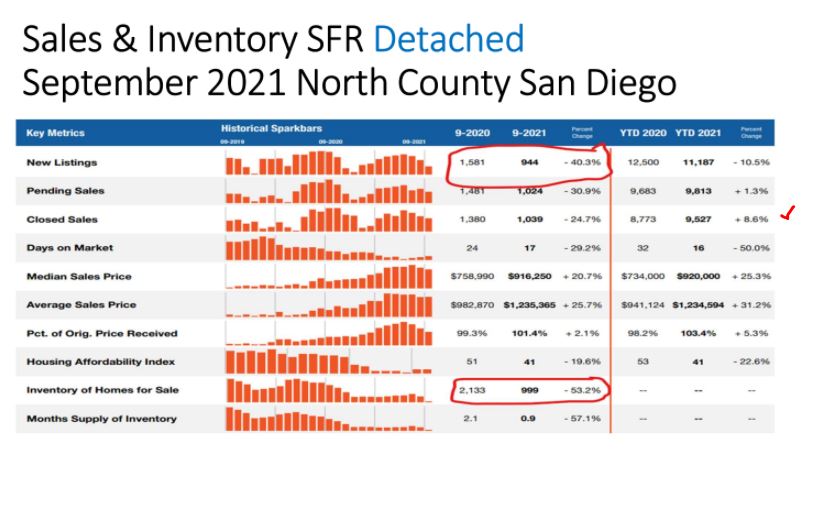 Thanks go out to Jerry Ryan, who publishes a monthly newsletter out of the goodness in his heart – giving us another look at the local stats.

He circled in red (above) and I added a red arrow below that show how the inventory has been so different this year – and it really dropped off in September.  Yet sales are actually higher, YTD.

I love his sparkbars too! 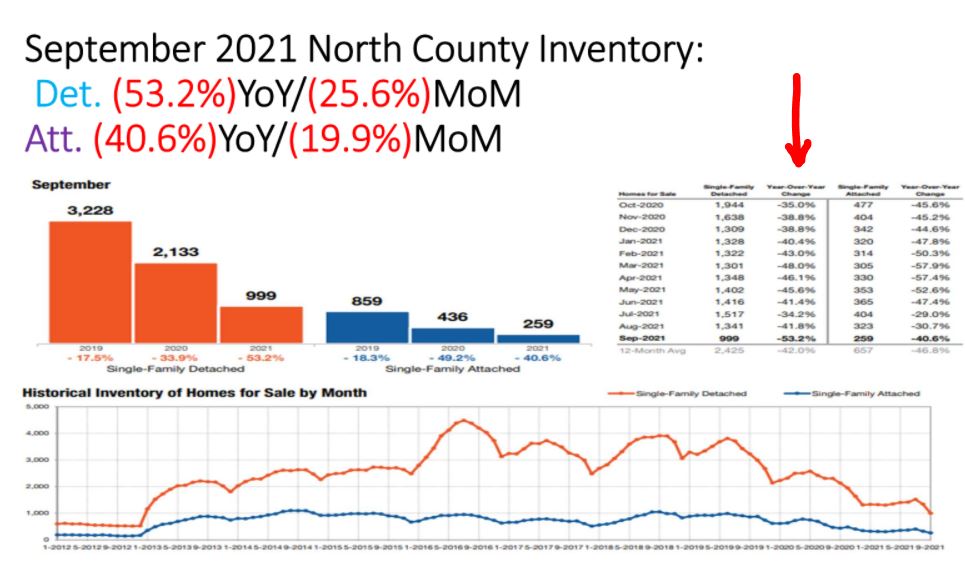 Previously, it might have been possible to have a month or two where the SP:LP ratio would be close to 100%.  But in 2021, we might have the ratio be over 100% for the entire year! 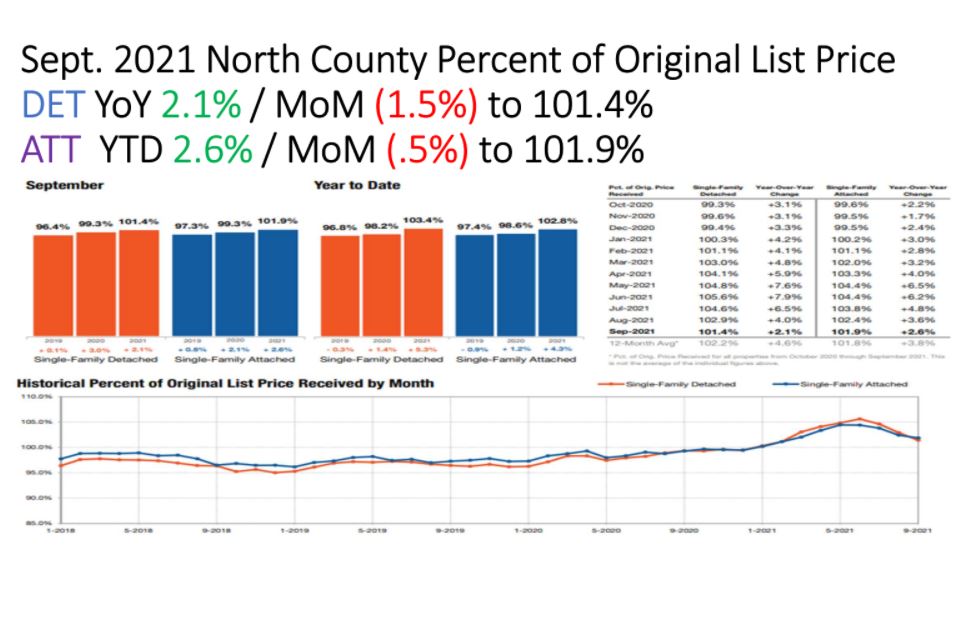 We had a surge in sales at the end of 2012 and 2020, and both were followed by incredible frenzy conditions the next year. Are we setting up for a big 2022? Here is the latest report on the national picture:

Existing home sales resumed an upward trajectory in September after dipping 2.0 percent in August. The National Association of Realtors® (NAR) said sales of pre-owned single-family houses, townhouses, condominiums, and cooperative apartments rose 7.0 percent in September, although this still left them 2.3 percent behind the pace in September 2020. Sales were at a seasonally adjusted annual level of 6 .29 million units, compared to 5.88 million the previous month and 6.44 million a year earlier.

Analysts polled by both Econoday and Trading Economics had expected sales to rise but undershot with consensus estimates of 6.03 million and 6.09 million units, respectively.

The rate of single-family home sales rose by 400,000 month-over-month, a 7.7 percent increase, to a seasonally adjusted annual rate of 5.59 million, but this was down 3.1 percent from sales the prior September. Existing condominium and co-op sales were recorded at a seasonally adjusted annual rate of 700,000 units, up 1.4 percent from 690,000 in August and 4.5 percent growth from one year ago.

“Some improvement in supply during prior months helped nudge up sales in September,” said Lawrence Yun, NAR’s chief economist. “Housing demand remains strong as buyers likely want to secure a home before mortgage rates increase even further next year.”

The share of first-time buyers slipped to 28 percent from 29 percent the prior month and 31 percent in September 2020. Individual investors or second-home buyers accounted for 13 percent of homes purchased during the month and 23 percent of sales were all cash, a 5 percentage point increase from a year earlier. Less than 1 percent of homes sold were foreclosures or short sales.

Mortgage Bankers Association (MBA) chief economist Mike Fratantoni’s commented that the gain in existing home sales “reflects contracts signed earlier in the summer. MBA’s purchase application data showed an 8 percent gain in September, which is evidence of growing demand for buying a home and supports further sales increases in the months ahead. With inventory at only 2.4 months’ supply, and median home prices increasing nationally at 13 percent, it was not surprising to see the first-time homebuyer share of the market drop again to 28 percent.

“MBA expects new home construction to help support growing inventory levels as we enter 2022, which will lead to a deceleration in home-price growth. Demand is strong and wage growth is healthy, and first-timers will have better chances to reach the market as inventory increases.”

Existing home sales moved higher in all four major regions compared to the August rate, but none gained ground on an annual basis. Sales in the Northeast increased to an annual rate of 770,000, a 5.5 percent rise from the previous month but down 8.3 percent year-over-year. The median price increased by 9.2 percent on an annual basis, to $387,200.

Sales in the South jumped 8.6 percent in September to a rate of 2.770 million units which was unchanged from the previous September. The median price grew 14.8 percent to $307,500.