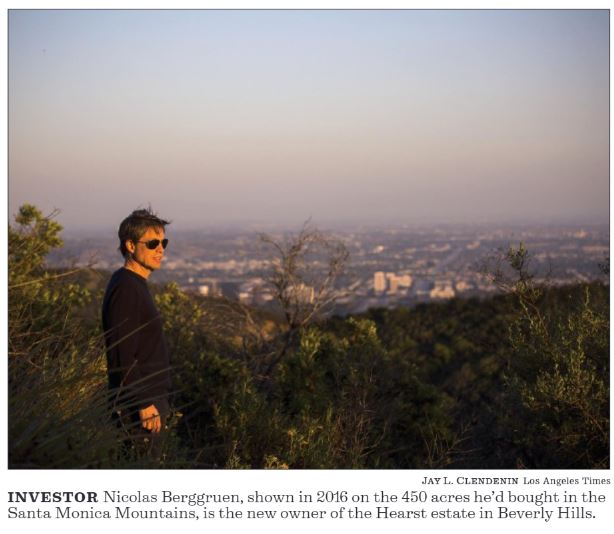 Nicolas Berggruen, a real estate investor who earned the moniker “homeless billionaire” through his jet-setting lifestyle and lack of a permanent address, just shelled out $63.1 million for the Hearst estate in Beverly Hills, winning the prized property in a bankruptcy auction that was more competitive than some expected.

The co-founder of the Berggruen Institute think tank beat out five other bidders at the Edward R. Roybal Federal Building and U.S. Courthouse in downtown Los Angeles on Tuesday in a heated auction that lasted around 45 minutes.

Twenty-four people — the bidders along with attorneys and agents — crowded into the courtroom, and a few others watched the action on a monitor in an overflow room, said Anthony Marguleas of Amalfi Estates, who held the listing on the estate.

The bidding began at $48 million — $1 million more than Berggruen’s original offer, which was accepted by the seller, attorney Leonard Ross, in August. The accepted offer triggered a Chapter 7 bankruptcy sale through auction, the proceeds of which will go toward paying off the roughly $50-million debt Ross has accumulated on the property after years of failing to sell the home.

With bids increasing in $100,000 increments, all but two bidders dropped out around the $52-million mark: Berggruen and MBRG Investors, a West Hollywood real estate investment company, records show.
Berrgruen’s winning bid of $63.1 million is the most ever paid for a home at an auction, beating out an Italian-inspired mansion in Beverly Park that sold for $51 million this year.

It’s a record-setting sale, but still far shy of the $195 million Ross originally wanted for the property . He set the ambitious price tag after the Playboy Mansion sold for $100 million in 2016, but years of relists and price cuts brought it down to $69.95 million earlier this year.

Like William Randolph Hearst’s other home — the famous castle in San Simeon — the Beverly Hills Hearst estate’s reputation precedes it.

In addition to being tied to the newspaper magnate, it was also said to be the honeymoon spot for President John F. Kennedy and Jacqueline Kennedy in the 1950s. Its myriad film credits include “The Godfather” and “The Bodyguard,” as well as Beyoncé’s 2020 visual album “Black Is King.”

Built in 1926, the salmon-colored showplace was designed by Gordon Kaufmann, the prolific architect behind the Hoover Dam, Greystone Mansion and the Hollywood Palladium. He designed it for banker Milton Getz.

The 29,000-square-foot Mediterranean mansion captures the spirit of Old Hollywood glitz and glamour with 22-foot-high hand-painted ceilings, a two-story paneled library, two screening rooms and an Art Deco nightclub with a bar salvaged from Hugh Hefner’s now-defunct nightclub Touch. In the billiards room is a stone fireplace moved down from Hearst Castle.

“You can’t build a house this big in Beverly Hills anymore, and getting 3.5 acres is very rare,” listing agent Gary Gold of Hilton & Hyland told The Times in August.

Since the property surfaced for sale in April for $89.75 million, there were 71 inquiries, 41 private showings and 12 written offers. Marguleas and Gold held the listing with Zizi Pak and John Gould of Rodeo Realty.

Berggruen, who was born in France, founded his private investment company Berggruen Holdings in 1984 and also created the independent think tank Berggruen Institute in 2010.

No stranger to Southern California real estate, he bought 450 acres in the Santa Monica Mountains in 2015 with the goal of building a headquarters for the think tank. Forbes puts his net worth at $1.7 billion.
The institute annually awards a $1-million prize “for major achievements in advancing ideas that shape the world.”

The estate is the latest prized property to hit the auction block because of bankruptcy. The owners of the Mountain, a 157-acre parcel in Beverly Hills touted as the city’s finest piece of undeveloped land, racked up a $200-million debt on the property, which led to it being sold for $100,000 at a foreclosure auction in Pomona.

Bids are being accepted through Sept. 27 for Mohamed Hadid’s infamous hillside home , which was ordered to be torn down by a judge who declared the 30,000-square-foot mansion a “danger to the public.” Proceeds of the sale will go toward the home’s destruction, and the winning bidder will get the raw land.

Just across the hill from Hadid’s place, Nile Niami faces a debt of more than $110 million on “The One,” a 100,000-square-foot mega- mansion that he’s been trying to sell for $500 million. A court-appointed receiver is preparing it for sale.