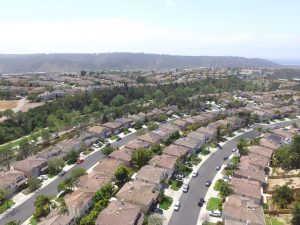 There aren’t many (if any) of the larger parcels left for big developments, but if the government was an easier and cheaper component, then new infill projects and the repurposing of commercial/industrial properties into residential could benefit – an excerpt from a CalMatters commentary:

If we want to begin to climb our way out of this housing crisis, where do we start? We can begin by fixing zoning, curbing the worst abuses of legacy environmental laws and lowering the mandatory fees that stifle homebuilding at the permit counter.

Visitors from New York are always entertained when we talk zoning. In the Empire State, if a piece of land is zoned for residential use, then the assumption is that a developer can build a house on it.

In California, we do things differently. Here land being zoned for a particular use is just the start of an excruciating permitting process which might, possibly, result in a house being built some years later. Don’t bet on it though – as NIMBYs will put up a fierce fight against any home building.

Then there is the innocently-named California Environmental Quality Act – the 1970s-era law originally intended to protect our state’s enviable natural beauty. In theory, it simply demands that public agencies analyze and mitigate the environmental impacts of projects.

In practice, it has resulted in a tsunami of litigation from environmentalists, anti-development campaigners and labor unions that is used to frustrate affordable housing.

Local authorities impose impact fees ostensibly to fund infrastructure needed to service new housing. California easily outpaces the entire country when it comes to setting impact fees – with an eye-watering $30,000-$40,000 per home being charged in some instances.

Some say this is a fair price to pay for the effect new residences have on a community. As a nonprofit developer, I know they often make affordable home-building an unaffordable prospect.

Never ones to let a good crisis go to waste, our NIMBYest NIMBYs enterprisingly argue that the pandemic is a further reason for not building anything anywhere in California. State lawmakers, they say, must not pass any pro-housing legislation for a year while the virus runs its course.

It is imperative that, as we begin the recovery from the pandemic, lawmakers ignore this call and finally cut the red tape that blocks building. Gov. Gavin Newsom must direct his new housing chief to put his shoulder to the wheel and actively promote homebuilding in the state capitol.

Finally, we must follow the example set by Habitat’s volunteer-in-chief, President Jimmy Carter, and champion the oft-neglected role of affordable homeownership. Promoting the American dream of owning a home strengthens communities and is a key driver of inter-generational success.

If we do this, we can once again help families make a decent future for themselves in California.