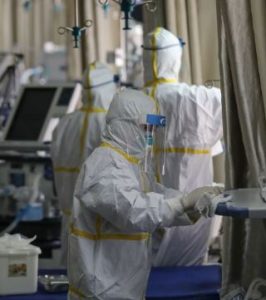 Michael Levitt, a Nobel laureate and Stanford biophysicist, began analyzing the number of COVID-19 cases worldwide in January and correctly calculated that China would get through the worst of its coronavirus outbreak long before many health experts had predicted.

Now he foresees a similar outcome in the United States and the rest of the world.

While many epidemiologists are warning of months, or even years, of massive social disruption and millions of deaths, Levitt says the data simply don’t support such a dire scenario — especially in areas where reasonable social distancing measures are in place.

“What we need is to control the panic,” he said. In the grand scheme, “we’re going to be fine.”

Here’s what Levitt noticed in China: On Jan. 31, the country had 46 new deaths due to the novel coronavirus, compared with 42 new deaths the day before.

Although the number of daily deaths had increased, the rate of that increase had begun to ease off. In his view, the fact that new cases were being identified at a slower rate was more telling than the number of new cases itself. It was an early sign that the trajectory of the outbreak had shifted.

Think of the outbreak as a car racing down an open highway, he said. Although the car is still gaining speed, it’s not accelerating as rapidly as before.

Three weeks later, Levitt told the China Daily News that the virus’ rate of growth had peaked. He predicted that the total number of confirmed COVID-19 cases in China would end up around 80,000, with about 3,250 deaths.

This forecast turned out to be remarkably accurate: As of March 16, China had counted a total of 80,298 cases and 3,245 deaths — in a nation of nearly 1.4 billion people where roughly 10 million die every year. The number of newly diagnosed patients has dropped to around 25 a day, with no cases of community spread reported since Wednesday.