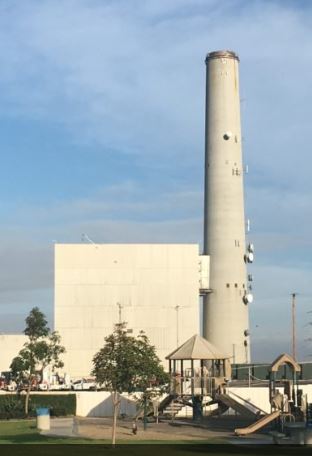 CARLSBAD — The iconic smokestack atop the Encina Power Station received a stay of execution.

The City Council approved an extension, not to exceed nine months, for the demolition deadline of the regional landmark.

Gary Barberio, deputy city manager for Carlsbad, said NRG Energy, which owns the power plant and new peaker plant located behind the old station, stated two reasons for the delay. One is the desalination plant using water pumps from the power plant for seawater. The second reason is an antenna atop the smokestack, which is used by the San Diego County Sheriff’s Department for its Regional Communications System used by law enforcement and fire departments for emergency response.

The goal is to have both items addressed by April 2020, although the desalination pumps may not be installed until June 2020, Barberio said.

“We are very hopeful the new system will be up and running for the sheriff’s department by April 2020,” he added.

NRG and San Diego Gas & Electric own large swaths of the property, although NRG owns significantly more. Barberio told the council he would not discuss a potential agreement with SDG&E and its North Coast Operations Center, which sits along Cannon Road.

The city is the land-use regulator, Barberio said in 2018. He said another part of the redevelopment plan is the city finding a suitable location elsewhere in the city for the operations center.

A switch station, owned by SDG&E, will remain on site to transition power from the peaker plant to the grid.

Eric Leuze, vice president of asset management for NRG Energy, said the delay is not ideal as it will cost more the longer the process is dragged out. However, according to the 2014 settlement agreement with Carlsbad, NRG is required to demolish the stack and plant to grade level.

Over the past several months, numerous residents have called to save the iconic stack, but the agreement, along with requirements from the California Energy Commission, require its demolition, Leuze said. In addition, the stack and plant will not be imploded, but rather “deconstructed” to mitigate dust and other material, he added.

“The concrete will be dropped down the stack with water to mitigate dust,” Leuze said. “This request should denot imply any lack of commitment on our part.”

Peter MacLaggan, senior vice president of California for Poseidon Water, which owns the desalination plant, said the company has all the permits needed to move forward with installing its own pumps.

He said the order was placed in May and they are expected to arrive in December. Although Poseidon has until June 2020 to completion the installation, he said the goal is to have the work completed by April.

Although the Encina Power Plant will be rubble in two years, part of the agreement between NRG Energy and the city was to allow the construction of the Carlsbad Energy Center, which is a natural gas peaker plant. The new facility generates 530 megawatts of power to the region.

The Encina Power Station was decommissioned on Dec. 11, 2018, after opening in 1954, while the stack was erected in 1978, Leuze said. The decommissioning was to take about one year, and NRG has two years from then to complete the demolition.