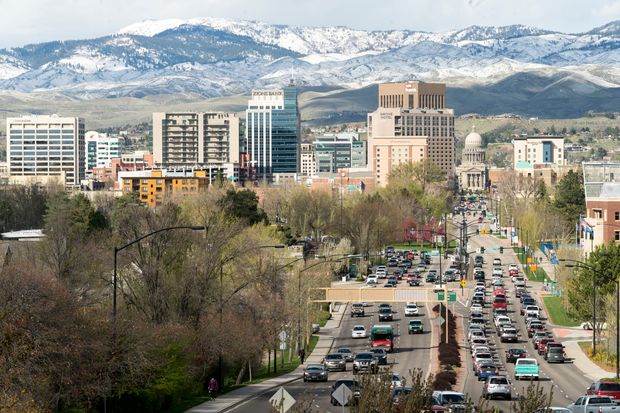 Here are Susie’s comments on the Boise article from Monday – she moved there from California a few years ago:

Hi Jim, just saw this. The recent election was interesting. Incumbent mayor Dave Beiter (since 2004) was running for his 5th term and received only 30% of the vote, while the Boise City Council president Lauren McClean got 46% of the vote. There was a field of 7 candidates. Wayne Richey, whose platform was anti-California, received just 2% of the vote.

McClean’s platform was for more affordable housing–(Boise was the fastest-growing city in the nation a couple years ago and prices have skyrocketed)–and transparency in local government.

Since no one received 50% of the vote, there will be a runoff for Boise mayor in early December between Beiter and McClean. The new home we built a year ago is only about a 1/2 mile from the Boise so I wasn’t able to vote in the Boise mayor election.

Yep, I did change my California plates as I heard that it was important to do. Ironically, I have been unable to remove my sunbaked UC-Santa Cruz bumper sticker in my back window as my daughter graduated from there in 2012. I have never had anyone yell at me on the roads but took a neighbors advice to say I’m from Santa Barbara and not California. Why? “Everyone loves Santa Barbara!”

The only time I’ve been verbally assaulted–strangely– had nothing to do with California. It  happened in my first few months here. A lady in a store was very upset at me because I pronounced Boise “Boi-zee” and not “Boi-see”. “If you’re going to live here, you better pronounce it correctly!,” she admonished me.

Being a real estate addict, I’ve asked agents if everyone moving here is coming from CA. The answer was California, Washington and Colorado, with some from the East Coast.

I find Boise a friendly place. When I moved up here, I decided it’s best not to get into too many political discussions. That philosophy has proven to be a good decision.
-Sue

PS I was in deep mourning over the Dodgers not getting into the World Series this year. How about you?