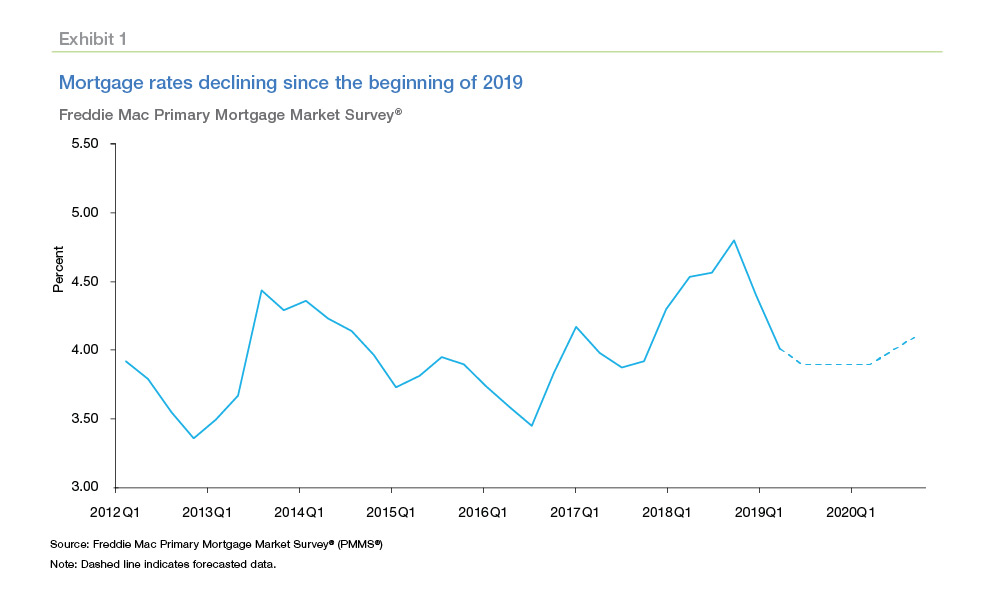 As long as everything stays rosy, we’ll be fine……

The housing market has been looking slightly better over the last few month and Freddie Mac July economic report reflects that fact.  They also maintain a fairly rosy picture of the economy as a whole.

They note that the 30-year fixed-rate mortgages (FRM) dipped below 4.0 percent at the end of May and has remained there “amid concerns over trade disputes, a possible economic slowdown, and market anticipation of a Federal Reserve interest rate cut.”  This has caused a spike in mortgage applications for both purchase and refinancing and they predict that low rates, along with a thriving labor market, will help sustain the housing market, not just short term, but for at least the next year and a half.

They have, in fact, revised down their quarterly forecasts for mortgage rates over that period, forecasting an annual rate for the 30-year fixed-rate mortgage of 4.1 percent this year and an even lower 4.0 percent in 2020.

As to other rates, while not predicting a cut in the Federal Funds rate after today’s Federal Open Market Committee (FOMC) meeting, they still expect “cuts” in the second half of the year and project an effective rate of 2.3 percent in the third and fourth quarters with an average of 2.4 percent for the year, unchanged from their earlier forecast. The average next year will be 2.3 percent in 2020 and they see no further FOMC cuts.

They say the strong homebuilder confidence and lower mortgage rates will lead to a recovery of housing starts and sales from their 2018 slump and that housing starts will end this year at 1.26 million and increase to 1.34 million in 2020.  Home sales will be 6.0 million in 2019 due to the continuing shortage of inventory but will return to 2017 levels of 6.12 million next year.

The recent home price reports have sent mixed signals, but the report’s authors expect home prices to rise by 3.4 percent this year.  They have revised their expectations for next year down to a 2.6 percent appreciation rate.