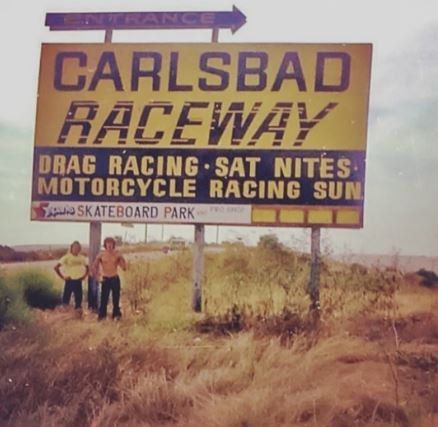 From the U-T archives:

Moates continued racing until 1984, when he joined with twin brothers Mark and Brian Simo, also racers, to create No Fear, the successful extreme sports gear manufacturer based in Carlsbad.

It took a decade, but those daring young American motorcyclists have, finally, routed the entrenched Europeans from the ruts, jumps and ditches of Carlsbad Raceway.

And the hero was homegrown, 23-year-old San Diegan Marty Moates, who rode the torturous 1.3-mile Carlsbad circuit like no man in the nine previous events, riding off with the following firsts:

Motocross enthusiasts have a term for it — holeshot. That is when one rider has a bead on the pack at the start and buries, so to speak, the competition in his dust. “One-one, bullets,” said another San Diegan and Moates’ friend Marty Smith (fourth in the second moto and eighth overall). “Marty put on a show.”

Moates got that holeshot on both starts before 35,000-plus and led for 29 of the 38 laps in the the 1 1/2 hours of racing. When he temporarily lost the lead, he came back with a vengeance against two of the world’s best — countryman Brad Lackey and Hakan Carlqvist.

“I was trying to peak for this race,” said Moates. “I know this course. I’ve been waiting years for this opportunity. This is home.”

While the European tour riders had never lost at Carlsbad, they had never faced Moates. Despite living a half-hour from the course, Marty never had a ride for the Grand Prix.

But he came into yesterday’s race with six straight wins in lesser events over the hard Carlsbad Circuit.

Did he have any secrets? Yes.

While everyone else swept clean the starting area around their bikes, Moates built a mound of dirt, pounded it hard and rolled the rear wheel into it.

When asked about the tactic after the first moto, Moates replied, “I was hoping nobody noticed. I’ll tell you why if it works again.”

It worked again, as the sixth-fastest qualifier duplicated his first moto start of getting through the treacherous 160-degree first turn ahead of the 40-bike pack. No one takes both starts.

“The undersurface at the start is cement,” said Moates. “If it’s swept off, the wheels spin. By packing dirt there, my wheels spin but I get forward momentum.”

His day was not without incident.

He fell midway through the first moto after leading by seven seconds in the opening laps.

“I lost control at a little ledge before the downhill,” Moates explained. “I prejumped the bump before it, hit the retaining fence and got thrown completely off the bike. It went five feet to the side of me and I ran back to it and got it up and going before it stalled.”

He recovered in time to keep third behind defending world 250 cc champ Carlqvist and eventual G.P. runnerup Danny LaPorte with 22 minutes to go.

After six laps of cutting the deficit, Moates moved. When Carlqvist slipped, LaPorte took the lead. Moates literally flew over the top of Carlqvist at the jump ending lap 15 to fall into second.

On the next circuit he passed LaPorte.

“Danny went into a turn and started to slide out. He saved it, but I gassed my bike and got around.”

When runner-up Carlqvist made a final run at Moates on the last lap, Marty pulled away going up the hill, flew over the crest, and got around with a five-second edge.

In between heats, Moates soaked his feet. He broke his right ankle in March and has been following a rigid 12-hour-a-day conditioning program since.

And he feared he broke his left foot midway into the first moto when it crunched against the bike.

And ride he did, again quickly opening a seven-second lead.

Historical photos and articles from The San Diego Union-Tribune archives are compiled by Merrie Monteagudo. Search the U-T historic archives at NewsLibrary.com/sites/sdub.