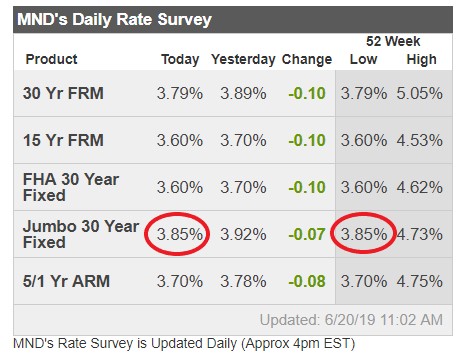 Good golly mortgage rates are at mid-to-high 3s and the lowest in the last 12 months.

If sales don’t ignite then the list prices are way out of wack!

Mortgage rates plunged today as the bond market extended its positive reaction to yesterday’s Fed announcement.  The Fed doesn’t set mortgage rates, but the market’s expectation of Fed rate-setting policy has a major impact.  In other words, because the Fed generally confirmed the market’s suspicion that rate cuts could be warranted in 2019, traders were willing to push rates even lower than they already had in advance of Fed day.

Some lenders had already adjusted rate sheets yesterday afternoon to account for the bond market improvements that were already in place.  In those cases, the surge to lower rates wasn’t quite as epic.  But for lenders who kept the same rates intact all day yesterday, there was a huge shift this morning, with the average lender improving by an entire eighth of a percent (0.125%).  Moves of that size only happen a few times a year, and we’ve definitely gone entire years without seeing it happen at all.

The average lender was quoting rates in the high 3’s this morning–mostly in the 3.75-3.875% range.  As the day progressed, bonds bounced and multiple lenders adjusted rates back toward higher levels.  Simply put, bond markets are conveying that all of yesterday’s improvements remained intact, but today’s gains were erased.  If lenders aren’t caught up with that reality by this afternoon, they will be by tomorrow morning (unless bonds undergo a big move overnight).