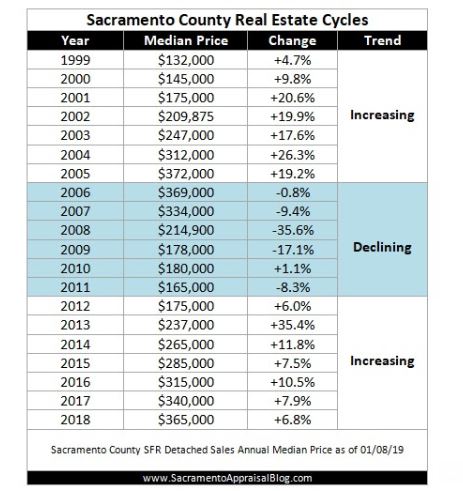 Ryan posted the history of real estate cycles in Sacramento County, so here are the same years for North San Diego County’s coastal region for comparison.  Human nature tends to flow in the same direction everywhere, and as a result, our history looks a little like his:

At the time it seemed like sky was caving in, but looking back we only had two bad years (2008 and 2009) in the last twenty. There was some scuffling around as we found our way in 2006-2007, and 2010-2012, but given that our market had been injected with the most exotic financing ever known to man, and then tanked by foreclosures and short sales, I think we did pretty good to survive it as well as we did.

With 90% of the NSDCC active listings priced over $1M, all we need is wealthy people to keep coming here to buy their forever home.  We’re still cheaper than the LA/OC and Bay Area, so we look attractive to downsizers.

Our pricing may bounce around, but without brainless bank clerks dumping properties for any price, who else is going to cause a collapse?  We could run low on the number of buyers – and if we did, all it would do is cause a protracted descent; re: soft landing over years.

Here’s a conversation I had yesterday with a guy who is 80+ years old and who has lived in his house since the 1960s:

Him: Convince me why I should sell my house.

Me: How are you getting around?

Him: I ride my bike to the store.

Me: Do you need the money?

Me: Have you ever dreamed about buying a house on the lake and fishing the rest of your life?

Me: Are you married?

Me: Did you know that if you did sell, you’d have to pay six-figures in taxes?  How would that make you feel?

Me: What happens upon your demise?

Him: My daughter will inherit – she grew up here, and will likely move back in.  But I told her if she doesn’t move in, it’s ok with me to sell it.

Me: Do you have a family trust?

Me: Did you know that if she sells the house, she will pay no tax?

Him: You’re kidding? If I sell it, I have to pay the tax man six-figures, but if she sells it, she pays nothing?  Jim, I think we have the answer!

There will be occasional sales where sellers hire bad agents and get taken advantage of, but there won’t be an avalanche of desperate sellers dumping for any price.  It would take a tsunami, earthquake, or terrorist event at the border to cause a drastic shift in housing – which could happen!

Here’s the latest photo of the nuclear waste being stored right on the surf at San Onofre.  All we need is one crack in a storage cask….. 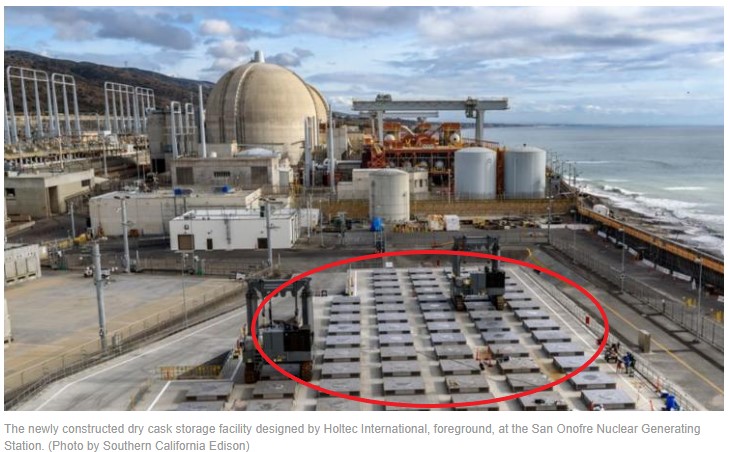 Without a catastrophic event, what’s the worst we can expect?

Maybe 5% drop in pricing in the short-term?

Any more than that, and sellers will just wait it out.