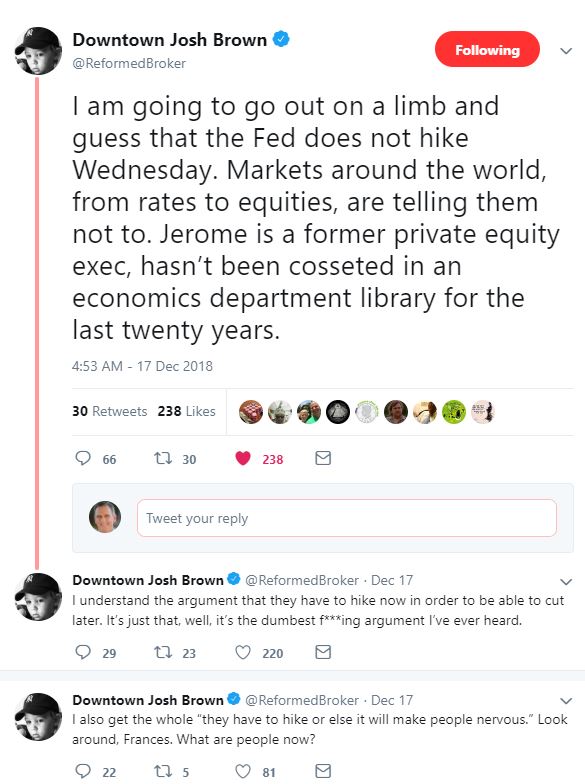 A pause in the Fed hikes was looking good.

First, the WSJ posted an editorial on Sunday – a snippet:

If you think your job is tough, consider Federal Reserve Chairman Jerome Powell. He’s signaled for months that the Fed will raise interest rates again this week, but economic and financial signals suggest he should pause. Meanwhile, Donald J. Trump is beating him up almost daily not to raise rates.

What to do? The right answer is to ignore the politics, inside and outside the Fed, and follow the signals that suggest a prudent pause in raising rates at this week’s Open Market Committee (FOMC) meeting. Get the monetary policy that best serves the economy, and the politics will work itself out. Get the policy wrong, and Mr. Trump will be the least of Mr. Powell’s political worries.

Trump could have just let it go…..but noooo, he had to tweet one more time:

In case the Fed is looking around for evidence, consider our recent home sales:

The Fed is going to be tempted to make their rate decision based on politics, and show Trump who the boss is. Median pricing is like politics – it makes you want to make decisions based on less-relevant data.

Keep your eyes on sales – they are the precursor of what’s ahead.

Even if the Fed skips this rate hike, we are still going to see sales plummet next year.  They could help make it a softer plummet though!