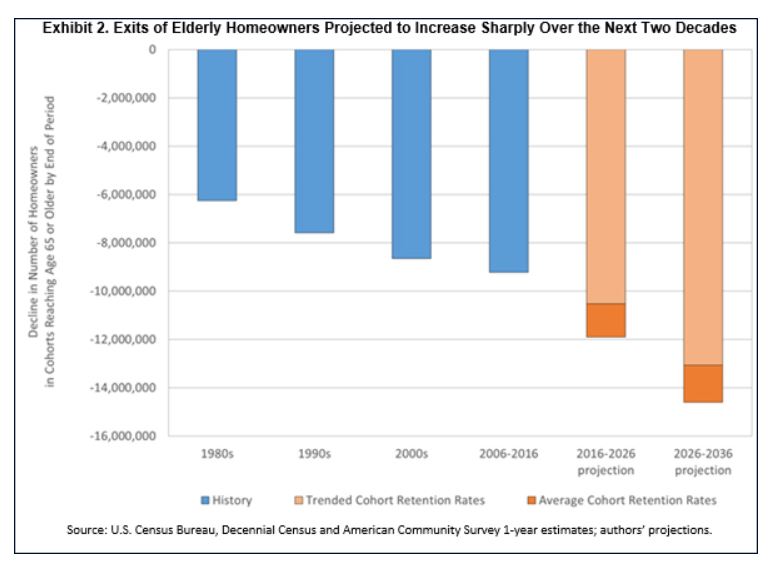 Another analysis from the ivory tower. I’d love to see them survey baby boomers and/or realtors, instead of just guess at what might happen.

Baby Boomers, the largest generation of Americans in history until the Millennials came along, have influenced the country since their birth and have created what could be described as a pig in a python in homeownership rates.

They are ageing, the leading edge of the group is now in their 70s, but still, according to Fannie Mae, inhabit 46 million owner-occupied homes with an estimated $13.5 trillion.  What happens to the housing market when that generation, voluntarily or not, exit homeownership?  Will the four generations following behind the Boomers step up and assume the mantle of homeownership?

While it doesn’t address the results of this inevitable generational shift, research by the University of Southern California and Fannie Mae’s Economic & Strategic Research Group attempts to determine its timing  and how precipitously it might occur by analyzing earlier generations of homeowners.  The results are reported on Fannie Mae’s Housing Insights blog in an article by the company’s Patrick Simmons and Dowell Myers representing USC.

Under all scenarios the authors predict substantial increases in the number of older adults who will exit homeownership over the next two decades.

In the ten years ending in 2016, homeowners who had aged to at least 65 declined by 9.2 million.  Over the next ten years, the authors say that number will be 10.5 to 11.9 million depending on the scenarios.  Going out ten years more, 2026 to 2036, the 65+ cohorts are projected to shrink by 13.1 to 14.6 million homeowners, a loss at least 42 percent greater than registered during the most recent decade.

The reason these exit numbers increase is, of course, the large number of homeowner adults involved in the relevant cohorts and how each age cohort swells with homeowners as Boomers enter into it.  In 2006, when the oldest Baby Boomers were only age 60, the 65-74 age group contained 9.3 million homeowners. By 2016, when the oldest Boomers had reached age 70, that number had swollen to 13.6 million. By 2026, when the youngest Boomers will be age 62 and the oldest age 80, the number of owner-occupants age 65-74 is projected to jump again to about 16.4 million, putting an even greater number of older owners on the precipice of aging-related homeownership attrition.

It will be aging Boomers who will trigger this potential mass exodus, but efforts on the part of industry and government will need to cross generations.  One such effort might be to extend the period during which the elderly can remain homeowners such as providing financing for home improvements or community-based support services either of which might allow homeowners to age in place.

At the demand end of the potential problem would be the provision of sustainable home purchase finance options to allow the younger generations to absorb the large number of Boomer homes likely to flood the market. Because immigrants contribute substantially to homeownership demand growth, immigration policy will also likely play a role in determining the adequacy of replacement demand for the homes vacated by Boomers.

The authors conclude that, regardless of the shape such efforts take, “fostering a smooth intergenerational handoff of housing assets will likely require approaches that span the age spectrum and that seek to forge a bond of mutual housing market interests between old and young.”