Rob Dawg is skeptical (as I have become) that boomers will be fleeing their long-time residences any time soon: 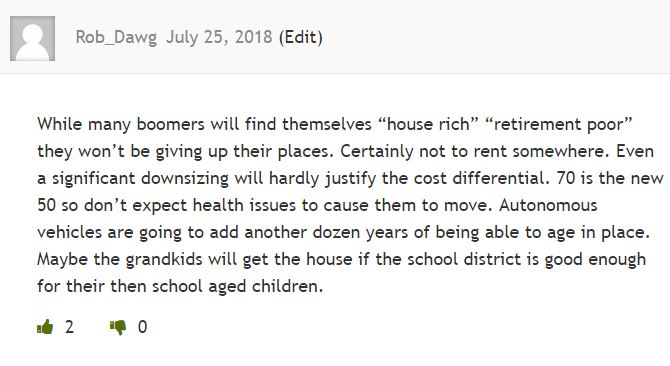 Reader Ty Webb isn’t so sure though:

For the most part, boomers own the houses, so besides the usual Big 3 reasons for selling (death, divorce, and job transfer), the boomers will be making the real estate market for the foreseeable future.  If boomers don’t sell, the inventory will remain tight.

I’ll lay off the incessant boomer drivel here after this – for at least a few days!  But first, here are excerpts from a post written by people who have real estate licenses, but I’m not sure that’s enough to be so confident about the boomer direction – so take this with a grain of salt: 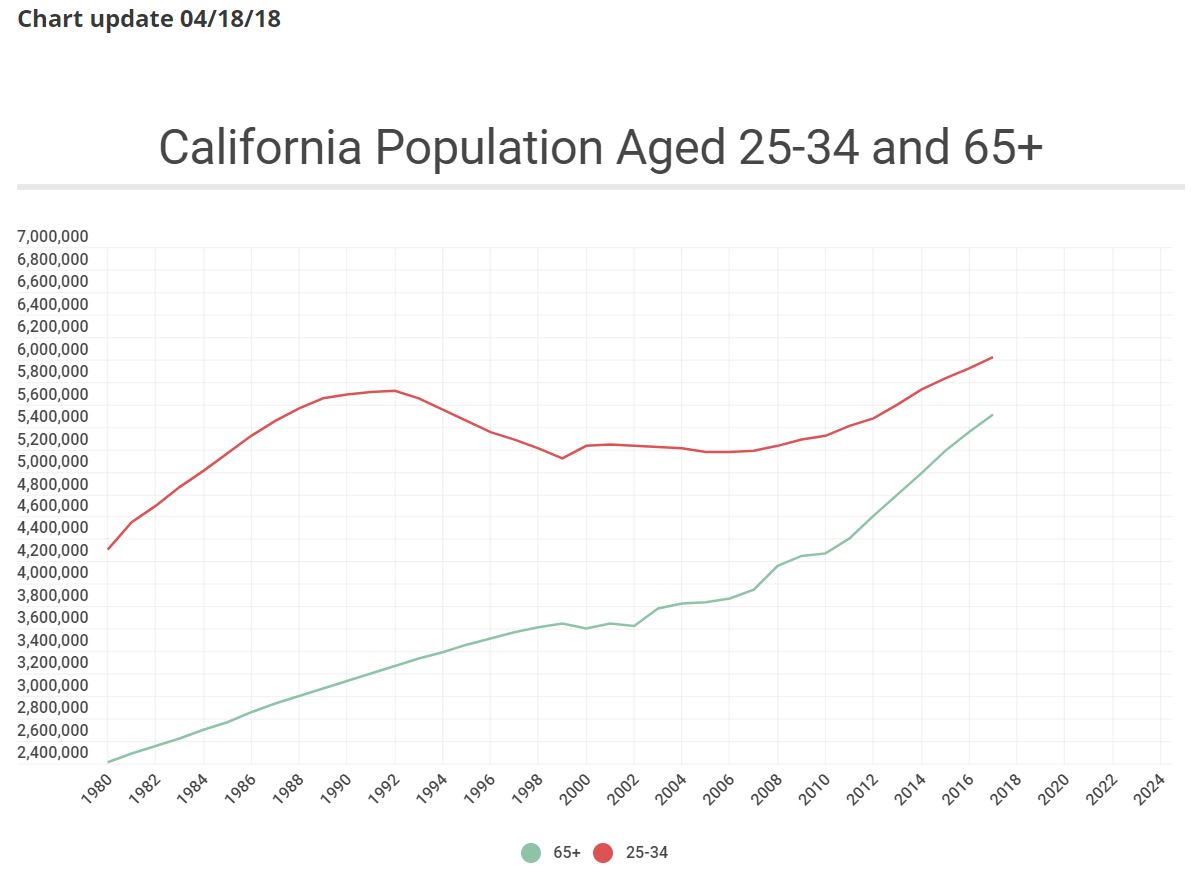 At about the age of 65, most Californians stop working full time and begin capitalizing on the benefits of social security, Medicare and their years of saving. The decision to retire is often swiftly followed by a series of lifestyle changes as retirees take advantage of their newly-increased liberty and accumulated financial power.

One of the most significant changes is the sale of the retiree’s current home and the corresponding move to a new, more compact and centralized residence with a better year-round climate or in closer proximity to family. As California’s population continues to age, senior citizens will exert increasing influence over both the housing market and every other aspect of the California economy.

Over the past twenty years, retirees have exerted minimal influence in real estate transactions, as the age group of citizens over 65 was comparatively small. The generations born between 1915 and 1935 – during the Great Depression and World War II – did not have the numbers necessary to remold the housing market in their own image. That is about to change dramatically, as the above population chart demonstrates.

The shadow inventory of retiree homes for sale will thus manifest itself sooner rather than later. Those homes will be key factors in the elimination of the current rigor mortis in the housing industry. Retirees generally want to sell and relocate, and most will buy new SFRs; likely more than 70% will acquire a smaller (though not necessarily less expensive) residence than the one they have left.

Historical trends in Boomer conduct will also prove true now as retirees sell their current homes, looking to find replacement properties and live freer lives. The first Boomers to retire, those on the cusp of the population boom, have somewhat higher average earnings and savings than those who will follow. Consequently, the retirees of 2008-2018 will have the most money to spend, and will often have a second or third home to live in or sell.

Those retiring after 2018 will (generally) have somewhat less money, and thus less purchasing power upon their retirement. Those who retire later will also have a greater disadvantage due to the competition from other retirees in their generation. The homes they sell will fetch lower prices, the urban condos and retirement-community dwellings will be full before they arrive and prices will be rising.

The price reduction of large suburban SFRs caused by Boomer home sales will be further aggravated by a corresponding rise in the values of the more desirable replacement homes in near urban centers. While we cannot predict with certainty which properties will be involved or just where they will be, historical and current trends give us some hints.

Homeownership is a well-entrenched habit among the Boomer generation; a fact not likely to change because of increased age. However, this does not mean retirees remain stationary.

Sooner or later they decide to move to a new location that has a better climate or is closer to other family members. With their collective savings and equity, most will have the resources to do so with ease.

Retirees have traditionally moved to smaller, more conveniently-located properties that are closer to urban centers. The U.S. Census Bureau reported in 2014 that approximately 12% of the population in California’s metropolitan areas is 65 or older.

To complicate Boomer relocation, the younger generation is better educated and more mobile, migrating with increasing frequency to the cities. Their parents are likely to follow. They will be attracted by the increased access to public transportation, the proximity to cultural and artistic institutions and (not least important) the closeness of their children and grandchildren.