Our contracts are ten pages of legalese designed specifically to protect realtors from lawsuits.  Would the outcome have been different if the plaintiff sued his own agent too?

A Coldwell Banker real estate agent at the center of a dispute that went to the California Supreme Court did not breach a fiduciary duty to the buyer of a Malibu mansion, a Superior Court jury ruled Thursday at a retrial of the case.

Nor did the agent intentionally or negligently misrepresent the property, the jury found.

The Supreme Court ruled in November 2016 that a real estate agent owes a fiduciary duty to the buyer – not just the seller – when one brokerage represents both sides of a deal. The case then went back to the trial court. 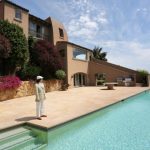 The dispute began after Hong Kong multimillionaire Hiroshi Horiike bought a Tuscan-style Malibu mansion overlooking the Pacific Ocean for $12.25 million in cash in 2007. The listing agent, Chris Cortazzo, gave him a flier that said the home had 15,000 square feet of living space as well as an MLS listing that did not specify the square footage.

But a building permit indicated there was a total of 11,050 square feet, including a guest house and a garage, while the tax assessor’s records showed it was less than 9,500 square feet.

The square footage question is complicated because Malibu uses a different metric than elsewhere, extending the measurements to garages and other spaces beyond the primary residence.

Horiike, who signed an advisory saying the broker was not responsible for verifying square footage, bought the property without further investigating its size, according to court records.

A couple of years later, seeking a permit to remodel a room, he found out the house wasn’t as large as he thought.

The defense argued at the first trial that Cortazzo was the exclusive agent of the seller and didn’t have a fiduciary duty to Horiike. The first judge agreed and dismissed Cortazzo from the case. A jury then ruled in Coldwell Banker’s favor.

The case was appealed, then went to the Supreme Court. While the court ruled there was a fiduciary duty, it did not rule on the merits of the case.

The retrial began on March 19. Horiike sought $4 million in damages plus interest, bringing the total to $7.5 to $8 million. Jurors got the case the afternoon of Wednesday, April 4. The verdict came back roughly a day later.

“I am pleased with the court’s decision. I operate with integrity and strive to uphold the highest of ethical standards. As always, I remain completely committed to my clients and bringing them a premier level of service,” he said.

Horiike was not in court for the verdict. Zachary Shorr, his attorney, said Horiike may appeal.

“I wouldn’t hesitate to if I were him,” Shorr said.