Renters On The Rise 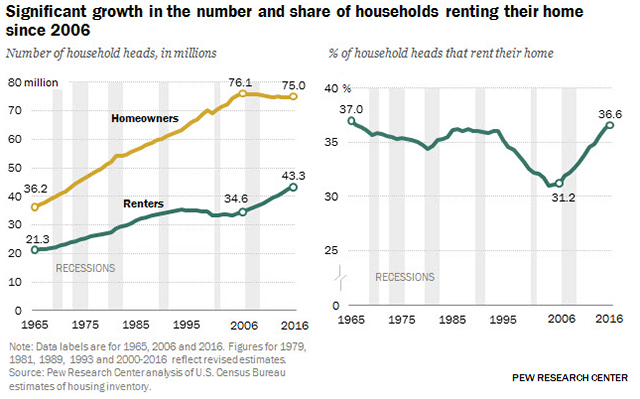 Hat tip to Kerry for sending this in!

Ten years after the U.S. housing market crashed, some things have gotten worse instead of better.

More U.S. households are headed by renters than at any point since at least 1965, according to new analysis of Census Bureau data by the Pew Research Center, a nonprofit think tank in Washington, D.C. “The total number of households in the United States grew by 7.6 million between 2006 and 2016,” it found. “But over the same period, the number of households headed by owners remained relatively flat, in part because of the lingering effects of the housing crisis.” And the rise in renters is significant, even accounting for the growth in the population over the last half-century.

The number of households owning their home has fallen since the peak of the U.S. property bubble in 2006, Pew found, while the percentage of households renting rose to nearly 37% last year from just over 31% in 2006. The 2016 rate is slightly less than the 37% in 1965. “Certain demographic groups ­— such as young adults, nonwhites and the lesser educated — have historically been more likely to rent than others,” Pew found. “However, rental rates have also increased among some groups that have traditionally been less likely to rent, including whites and middle-aged adults.”

One reason so many people are renting: Only 45% of renters on average can afford the payments on a median-priced home in their area, according to a report on the state of housing from Harvard University’s Joint Center for Housing Studies released last June. Buying a house is even more out of reach for renters in expensive markets such as the West Coast, the Northeast and Florida. In these parts of the country, as few as 10% of renters could afford the mortgage payments if they bought a home, the report found. Economists recommend spending no more than 30% of gross income on housing. 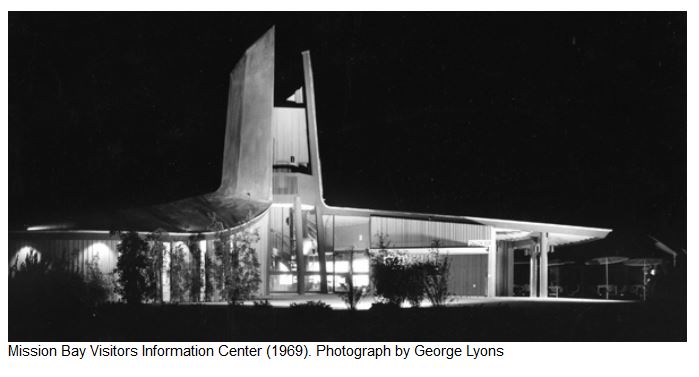 Finally something will be done with this building! Hat tip Keith:

Architect Dick Lareau studied under sculptor John Dirks and painter Jean Swiggettat while attending San Diego State College prior to transferring to Cal/Berkeley. Following his return to San Diego, Dick started his professional career in the office of Kitchen & Hunt and later for Paderewski, Mitchell & Dean until he opened his own office on 6th Avenue in 1957. Over the years, Mr. Lareau built a successful practice – often noted for the designs for the Cal Western campus (later Point Loma Nazarene). Mr. Lareau will speak on his career and experiences on Thursday, November 16th at the Point Loma Assembly from 5-7pm.

It was recently announced that Lareau’s Mission Bay Visitors Information Center (1969), which for decades welcomed tourists and locals, “…will be transformed into a casual restaurant with outdoor dining, plus beach and bike rentals,” according to the UT. Following San Diego City Council approval of a new long-term lease with San Diego-based Playground Concepts, the 2.6-acre city-owned site on East Mission Bay Drive will be renamed Shoreline Mission Bay. 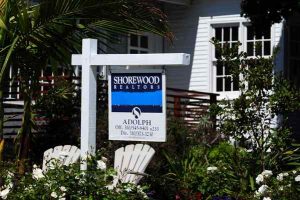 This survey of ivory-tower guys indicates that the threat of a bubble-bursting is low. The last bubble was full of people who couldn’t afford to hang on; this one has been built by the affluent.

Historically, Thornberg has been the most rational analyst:

Will prices keep rising? Are prices close to the top?

We asked a half-dozen economists and industry analysts what the future holds for home prices in the region. Among their answers:

Southern California home prices aren’t about to drop. In fact, they believe prices will keep rising for two more years, at least, and possibly longer.

The market isn’t in a bubble — yet — although bubble talk is starting to “raise its ugly head” at cocktail parties, one economist said. Some analysts are saying Southern California home prices are showing signs of being overvalued.

If you’re thinking about buying a home, now just might be the time to act — provided you don’t overextend yourself and you plan to live there awhile.

Here are five key questions about where Southern California home prices are heading in the future:

ARE WE AT THE PEAK?

Not one of the economists we interviewed thinks we are, at least not for entry-level homes.

Luxury homes, priced at $2 million and up, may have reached a price peak and are facing an oversupply of listings, analysts said.

Nominal home prices have surpassed prerecession highs in Orange and Los Angeles counties. Riverside and San Bernardino counties are about 18 percent below their price peaks. But none of those counties has reached prerecession peaks in inflation-adjusted dollars.

Another fact to consider: During the last market run-up, Southern California home prices increased year over year for 126 consecutive months, or 10½ years. That’s twice as long as the current streak in home price gains.

Lastly, analysts say home prices aren’t rising that much. Price increases averaged 6.3 percent in Southern California in the past year.

HOW MUCH LONGER WILL PRICES GO UP?

How much longer prices rise depends on what happens to the overall economy.

“At some point, there’s going to be a correction, but I don’t see it on the horizon,” said Pat Veling, president of Brea-based Real Data Strategies. “Sellers want more than sellers got six months ago.”

Projections by the California Association of Realtors show a gradual decrease in home price appreciation over the next few years, said Oscar Wei, a senior economist for the group. For example, CAR projects prices will go up 5 percent statewide in 2017, 4 percent in 2018, and 2.5 percent in 2019.

Assuming the gross domestic product continues to grow at 2.5 percent and mortgage interest rates stay below 4.5 percent, Southern California home prices could be going up at 6 percent a year for the next six to seven years, said Christopher Thornberg, a founding partner of Beacon Economics and a former UCLA economics professor.

“Given the supply shortage and the strength of the California economy, (that’s) perfectly reasonable,” Thornberg said. He added: “Reasonable here means it’s not a bubble and they won’t collapse.”

Kayla does more than open doors – she has opinions about real estate!

Here’s how one buyer described her experience:

Foreign purchases of U.S. residential real estate surged to the highest level ever in terms of number of homes sold and dollar volume.

Foreign buyers closed on $153 billion worth of U.S. residential properties between April 2016 and March 2017, a 49 percent jump from the period a year earlier, according to the National Association of Realtors. That surpasses the previous high, set in 2015.

The jump follows a year-earlier retreat and comes as a surprise, given the current strength of the U.S. dollar against most foreign currencies, which makes U.S. housing even more expensive. Apparently, the value of a financial safe-haven is outweighing the rising costs.

Foreign sales accounted for 10 percent of all existing home sales by dollar volume and 5 percent by number of properties. In total, foreign buyers purchased 284,455 homes, up 32 percent from the previous year.

Half of all foreign sales were in just three states: Florida, California and Texas.

Chinese buyers led the pack for the fourth straight year, followed by buyers from Canada, the United Kingdom, Mexico and India. Russian buyers made up barely 1 percent of the purchases. 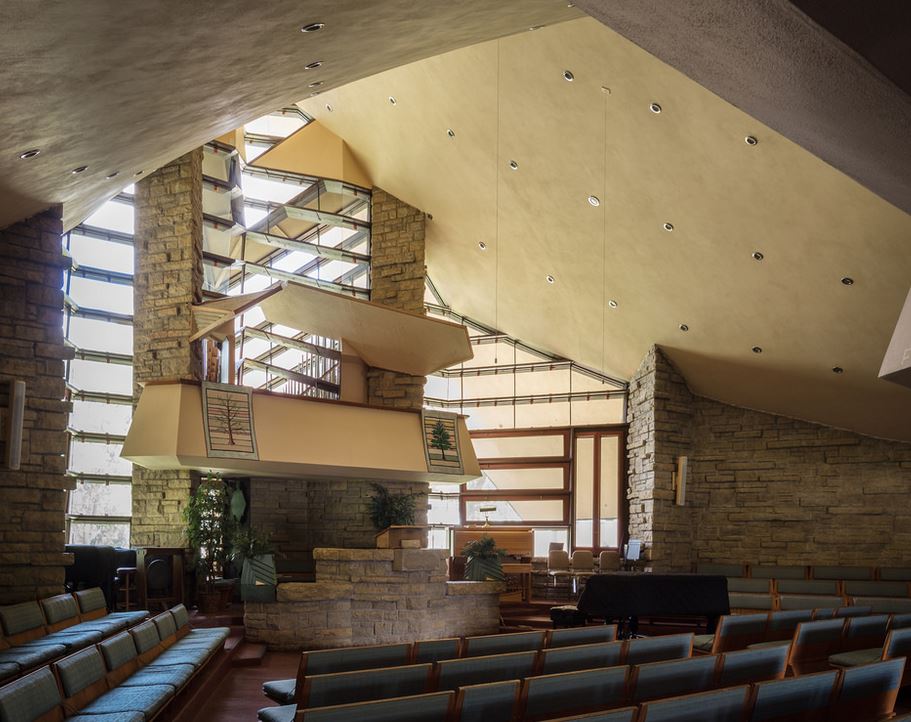 A fascinating blog post of a tour of FLW’s work in Wisconsin:

I was contacted by Travel Wisconsin, and invited to come out to their beautiful state to spend a week on the Frank Lloyd Wright Heritage Trail, to celebrate Mr. Wright’s 150th Birthday. Wright is from Wisconsin, of course, and many of his most iconic works are located there. It was an offer that was to good to pass up. I’ve travelled around the world, but I’ve never been to Wisconsin. And while I had been in some FLW homes and buildings, getting a chance to see mythical places like Taliesin and the Johnson Wax Factory in person was a dream come true. It was also a chance for me to take a fresh look at an iconic architect I thought I already knew well. It was one of the best weeks I’ve every spent – a truly once-in-a-lifetime experience.

Dumbing Down of Real Estate

It’s not just Redfin, most other agent teams are known to have newer realtors on the front lines these days.  Another start-up gives the lockbox code to buyers so they can take their own look around.  A recent survey showed that 1/3 of buyers are making offers on houses they haven’t seen in person!

Experienced agents are doing less and less, and in some cases, they aren’t involved at all.  We are being told that it’s good for the consumer too, because now they get to interact with ‘specialists’ for each phase.

But it appears that consumers may not care that much about getting good help!

Hat tip to GW and MF who both sent this in: 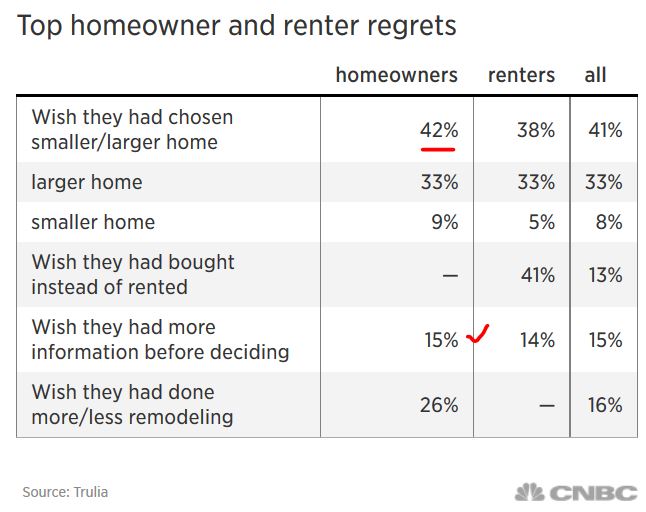 Of those surveyed, 42% of buyers regret the size of home they bought – but only 15% wish they had more information?!?!?!  You have to be kidding!!

Are consumers watching a few HGTV real estate shows and then wandering into their real estate experience thinking they know enough?  It appears so!

Good or lousy help costs the same – but the other prices you pay could be huge! 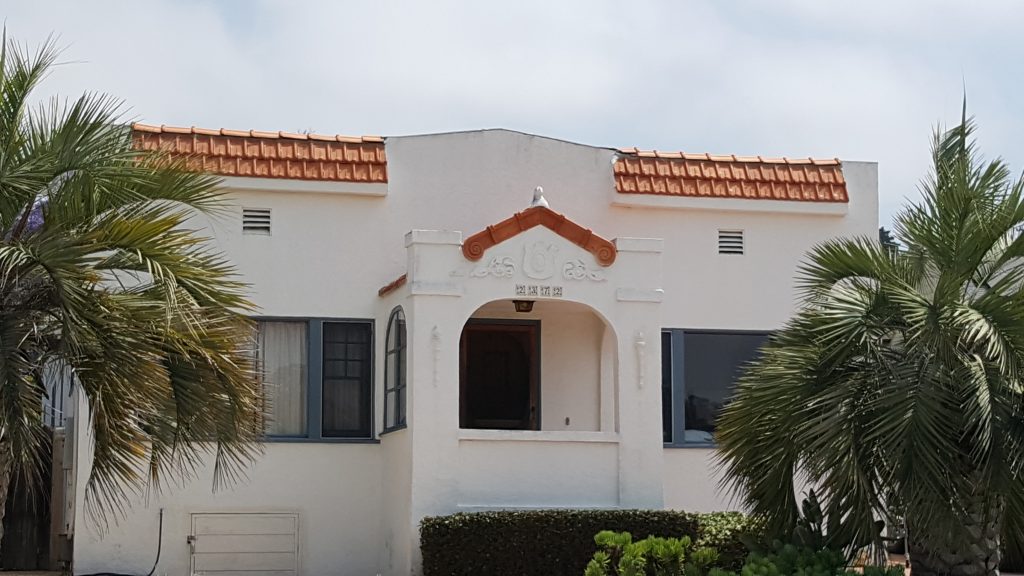 We had a surge of new listings this week, and the new pendings were slow to follow – but the same thing happened last year:

We’re still doing better than last year, which was a good year.

END_OF_DOCUMENT_TOKEN_TO_BE_REPLACED

It looks like we are cycling through all the buyers with big down payments, and giving the less-fortunate folks a chance… 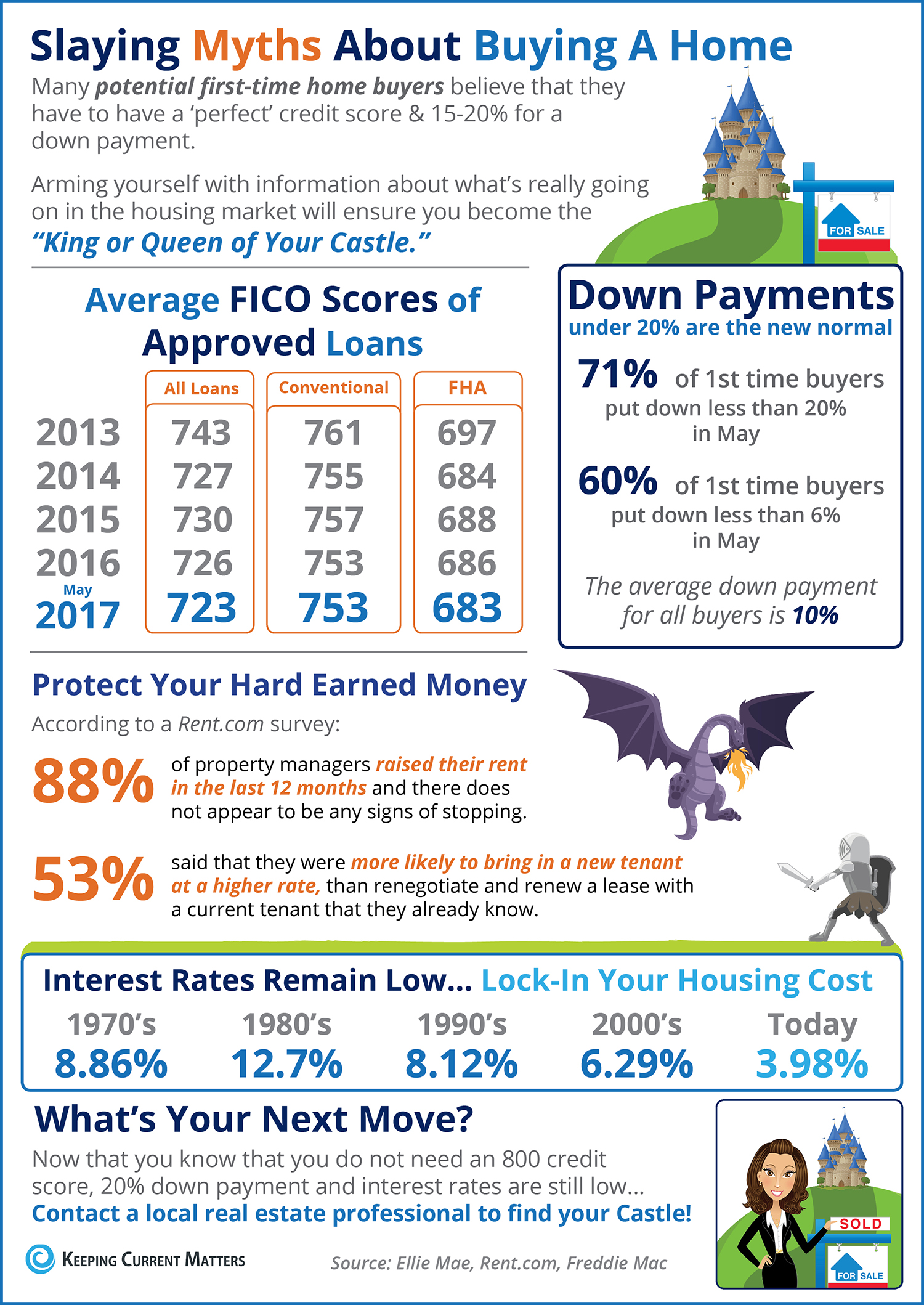 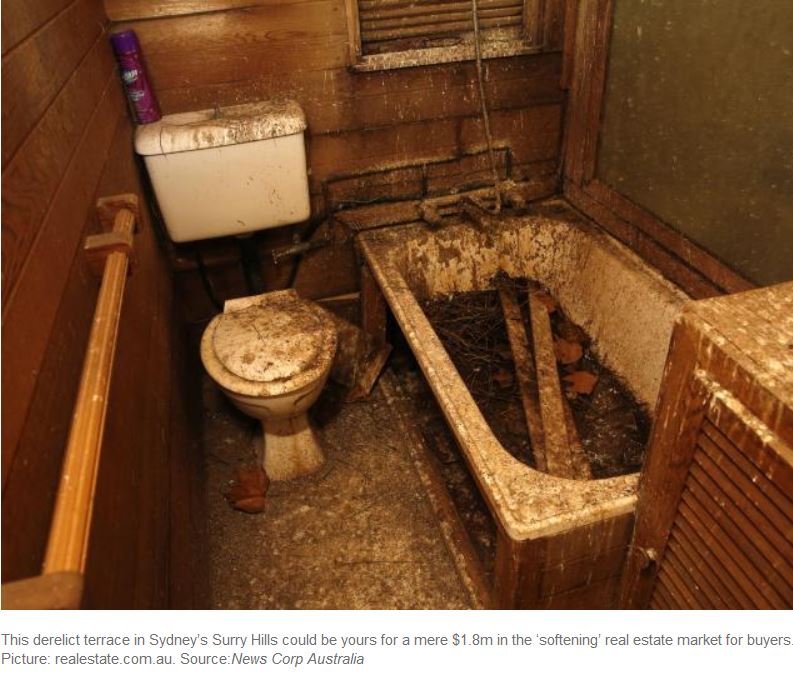 SQUALID dumps including completely unliveable houses are up for sale as the real estate market prepares for a “Super Saturday” of auctions.

The number of houses advertised for sale in Sydney is on a three-year high, reflecting a boom of 13 per cent since this time last year.

The larger selection of properties means buyers are “less likely to be blown out of the water by whopping great bids”, the Daily Telegraph reported.

And there is less competition for complete “fixer uppers”, crumbling, derelict old houses ready to be snapped up by brave renovators.

Real Estate Institute of NSW president John Cunningham said buyers could compete for homes this weekend with the pressure easing off a previously crowded field for a handful of homes.

Investors had begun to withdraw from purchases as banks restricted investment loans.  This put ordinary buyers in a stronger position to negotiate deals for houses with defects. 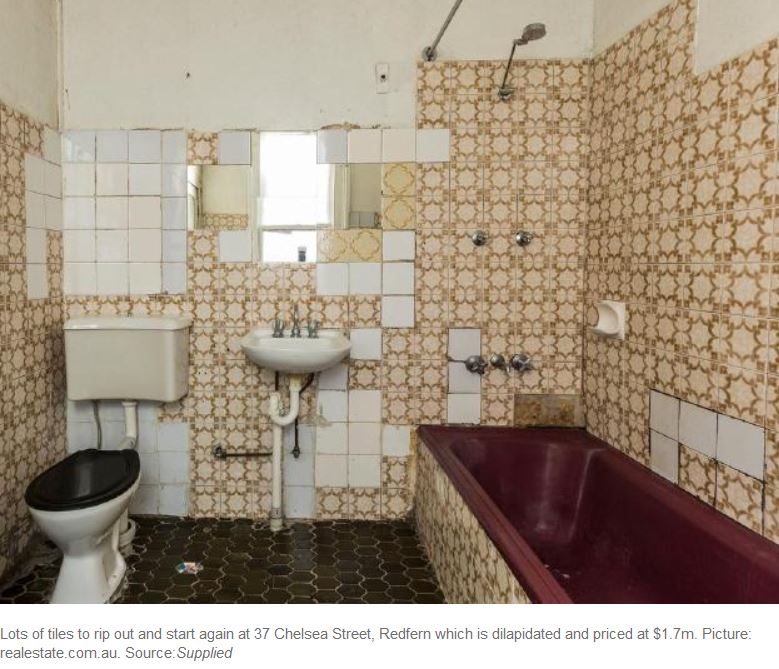 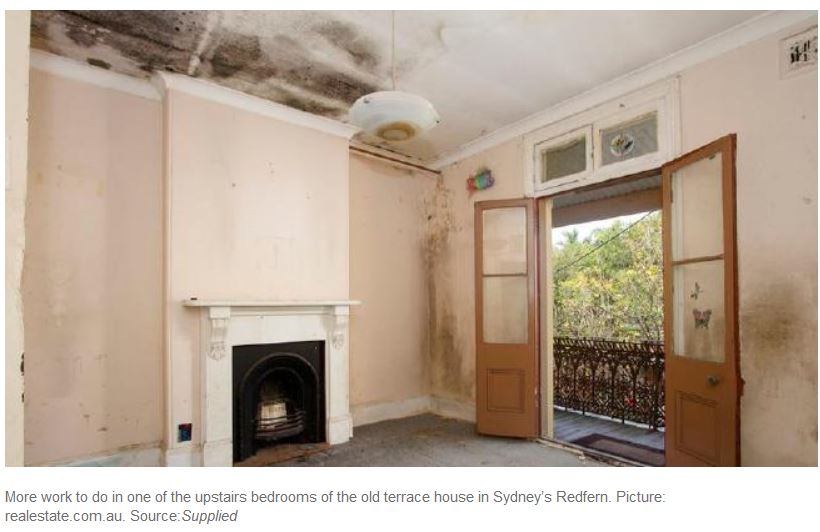